Signs of the times: Obama’s eye 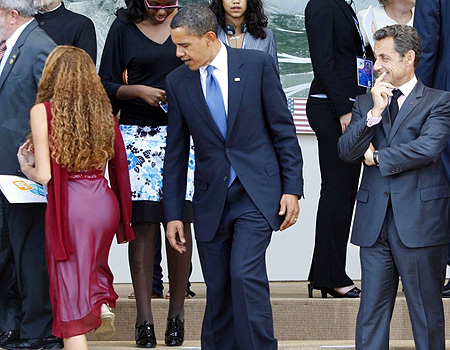 Yes, this photo of Obama ostensibly eyeing a young woman (apparently a 17-year-old delegate from Brazil–where are her parents?!) at the G-8 Summit is the hottest Google search item. And of course the question of what Obama was thinking is a leading Fox News story.

So it goes, even as the leaders try to address such minor topics as climate change and world hunger.

God knows Sarkozy, that ol’ chien, seems to be leering–quelle surprise, eh? Obama could plausibly be looking elsewhere. Still not quite to the level of, say, Mark Sanford or John Ensign, I think. I confess I’d have looked, if only for the definite “wow” factor the young woman was likely going for.

I was also struck by an odd coincidences, in that as this story popped over the transom I was lifting bits out of Bruce Gordon’s grand new bio of John Calvin for a piece on Calvin’s 500th birthday, which is today. Gordon tries to dispel some of the myths of Calvin as “an unyielding, moralistic and stone-faced tyrant who rejected all the pleasures of life.” And he writes that in his correspondence Calvin “could let drop a line that indicated an eye for beautiful buildings and a well-dressed woman.”

Anyway, maybe a shot of Barack with Benedict–should be coming soon–will displace the Girl from Impanema. But don’t bet on it.

read next post
The Pope and the Prez: Together again for the first time
archives most recent
More from Beliefnet and our partners
previous posts