Vatican editor: “Obama is not a pro-abortion president.” 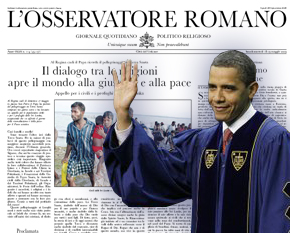 That is the judgment of the editor of L’Osservatore Romano, Gian Maria Vian, whose paper’s rather neutral (neutered, to some) coverage of Obama has been in decided contrast to segments of the American church–and no small cause of consternation to such segments.

The Vatican editor’s verdict comes in an interview with an Italian journalist, Paulo Rodari, a Vatican analyst for the daily “Il Riformista.” (Catholic News Agency has English-language coverage from which this s drawn, and this cool photo shop image; here is the Italian version.)

Speaking to Rodari, Vian offered an analysis that may confound many–but which I found spot-on:

“Obama has not upset the world,” he said. “His speech at Notre Dame has been respectful toward every position. He tried to engage the debate stepping out from every ideological position and outside every ‘confrontational mentality.’ To this extent his speech is to be appreciated….Let me be clear, L’Osservatore stands where the American bishops are: we consider abortion a disaster. We must promote, always and at every level a ‘culture of life’.”

“What I want to stress is that yesterday, on this precise and very delicate issue, the President said that the approval of the new law on abortion is not a priority of his administration. The fact that he said that is very reassuring to me. It also underlines my own clear belief: Obama is not a pro-abortion president.”

Vian also noted that the newspaper covered Obama’s speech but also ran  sory critical of his embryonic stem cell research position. “This is our policy, the way we inform. If a national bishops’ conference says something, we report it.” But he siad “it is “appropriate to present other perspectives” to the readers so they can accurately judge “international information.”

Rodari concludes with his own take, that “the words of Vian are important. Because they speak about a confrontation between Obama and the Catholic Church which for now seems to be limited mainly among part of the American episcopate. A confrontation that the Holy See neither approves nor disapproves. Simply observes.”

A sage take. Roma locuta, causa non finita, however. Vian is, it must be said, not all of Rome. But…

Saint Newt's conversion: "Part of me is inherently medieval."
archives most recent
More from Beliefnet and our partners
previous posts