Saint Newt’s conversion: “Part of me is inherently medieval.” 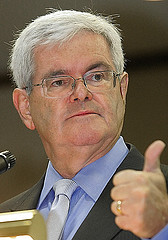 Many would agree, no doubt. But that line, from Dan Gilgoff’s conversation with Gingrich on his conversion to Catholicism, refers not to his political philosophy (that comes later) but to part of the appeal of the church for the former speaker and GOP presidential aspirant (possibly). So it’s not such a bad thing. (Besides, color me thirteenth-century.) The Gingrich interview came on the even of a trip to Poland (with wife Callista, a Catholic) to film a documentary about John Paul II’s visit in 1979, Nine Days That Changed the World, slated for release this fall.

Gingrich, who converted at Easter this year, was interesting alking about the accumulation of factors that led to swimming the Tiber after a decade-long process (and many a personal, ahem, travail, that may or may not have contributed to his journey). Gingrich’s list would likely resonate with many:

That’s part of what led to my conversion is the first time we [he and Callista] went to St. Peter’s together. It’s St. Peter’s. I mean, you stand there and you think, this is where St. Peter was crucified. This is where Paul preached. You think to yourself, two thousand years ago the apostles set out to create a worldwide movement by witnessing to the historic truth they had experienced. And there it is. The last time we were there we were allowed to walk in the papal gardens and you get this sense that is almost mystical.

The moment that finally convinced me [to convert] was when Benedict XVI came here [to the United States] and Callista in the church choir sang for him at the vespers service and all the bishops in the country were there. As a spouse, I got to sit in the upper church and I very briefly saw [Benedict] and I was just struck with how happy he was and how fundamentally different he was from the news media’s portrait of him. This guy’s not a Rottweiler. He’s a very loving, engaged, happy person.

I’d first seen Pope John Paul II when he came to the U.S. when Carter was president and I was a freshman congressman. And I [later] met him as Speaker.

The other sense is that the church has had two of its most powerful popes back to back, in their intellectual ability to engage the secular world on behalf of Christ. And the weight of all that, and going with [Callista] to church every Sunday to the Basilica [in Washington, D.C.], a magnificent church with a wonderful mass. In that sense I felt differently a long time ago, which is why I converted.

And part of me is inherently medieval. I resonate to Gothic churches and the sense of the cross in a way that is really pre-modern.

All interesting and valid, but also interesting he made no mention (or at least Dan didn’t cite any) of distinctive Catholic beliefs or sacraments.

One thing that conversion does not seem to have changed for the once (and future?) Republican bad boy is his politics. Indeed, he said liberal politics drove him to the chuch:

The whole effort to create a ruthless, amoral, situational ethics culture has probably driven me toward a more overt Christianity. I’ll give you an example. As a college student at Emory when the Supreme Court ruled that school prayer was unconstitutional [in 1963] after 170 years of American history, I didn’t notice it. As a graduate student at Tulane I probably would have said it’s a good decision.

I’ve now had an additional 40 years to think about it. And I think about the world of my grandchildren. I don’t think American children are healthier, safer, and better off today than they were in 1963. So I have actually become more conservative in response to the failure of the liberal ethos to solve problems.

Hmmm. May the mystagogy continue.

Howdy, cowboy!
archives most recent
More from Beliefnet and our partners
previous posts