Local TV reports are naming the 51-year-old suspect as Scott Roeder, and other reports indicate he may have been a member of the anti-government Freemen group who was arrested in 1996 after authorities found what were apparently bomb-making materials in his car.

News reports at the time identified him as Scott Roeder, 38, of Silver Lake, Kan., which would make him 51 today, the same age as the suspect in the Tiller killing. Other reports are tying him to anti-abortion groups like Operation Rescue whose site, including its “Tiller Watch,” is down), but no confirmation on that, and the links appear thin; he may have posted comments on the site, e.g.

The Daily Kos folk are already pushing the TERRORIST meme. Others are citing the April Homeland Security Department report on concerns about right-wing extremism that made a brief mention of anti-abortion groups.

Andrew Sullivan has several good posts, with links to the kind of language that can lead to such killings, saying, “Christianist terrorism is no more defensible than Islamist terrorism.”

dotCommonweal also has a vigorous discussion on the power of words and what this could mean for the pro-life movement–and the responsibility of everyone who is pro-life to condemn it, not just the movement types.

The Wichita Eagle continues to be all over this story.

My Beliefnet colleague Rod Dreher condemns the killing but adds, ” I would hate to be George Tiller facing judgment with those grave sins to explain.”

He also has a statement from Robert George at National Review’s Corner saying “Whoever murdered George Tiller has done a gravely wicked thing,” and ending: “Let our ‘weapons’ in the fight to defend the lives of abortion’s tiny victims, be chaste weapons of the spirit.”

It’s a race between the likes of George and the Daily Kos to see who defines this story first. Much will depend on who Scott Roeder turns out to be. But the anti-abortion folks are playing defense, and they’ve been down this road before.

“George Tiller was a mass-murderer. We grieve for him that he did not have time to properly prepare his soul to face God. I am more concerned that the Obama Administration will use Tiller’s killing to intimidate pro-lifers into surrendering our most effective rhetoric and actions. Abortion is still murder. And we still must call abortion by its proper name; murder.”

Kathryn Jean Lopez, who passes it on, also doesn’t help the cause by comparing Terry to legit Muslim advocacy gorups. Huh?

What George Tiller did was evil and that should not be glossed over or sugarcoated. But here Randall Terry is doing exactly what CAIR does. When someone dies at the hands of a Muslim, CAIR rushes to warn the rest of us not to use it as an excuse to scapegoat Islam.

An evil thing has happened–a man has been killed–and to jump to points of politics and media criticism is wrong. Evil begot more of it here. 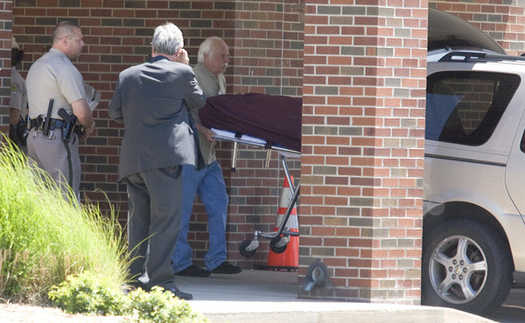