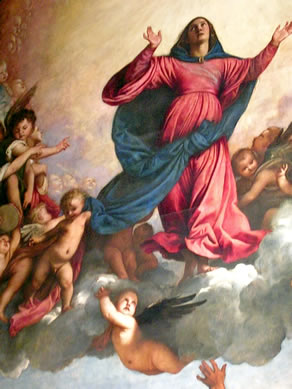 A lobby of hyper-Marianists sees signs that Benedict XVI is open to declaring the dogma that the BVM “corempetrix” of humanity with her Son–that’d be Jesus Christ. From the Vatican, RNS’ Francis X. Rocca reports this week:

At least 7 million Catholics from more than 170 countries, including hundreds of bishops and cardinals, have reportedly signed petitions urging the pope to proclaim Mary “the Spiritual Mother of All Humanity, the coredemptrix with Jesus the redeemer, mediatrix of all graces with Jesus the one mediator, and advocate with Jesus Christ on behalf of the human race.”

In other words, the Virgin Mary–though always subordinate to and dependent on the will of Christ–plays an active, unique and irreplaceable role in helping her son deliver mankind from sin and death.

Proponents say that such a statement would represent the culmination of the church’s traditional teaching on Jesus’ mother, and bring the world untold spiritual and material benefits.

But critics of the proposed dogma say it would exaggerate Mary’s true importance and undermine efforts toward unity with other Christian denominations.

The idea of Mary as Christ’s collaborator in the redemption of humanity is deeply rooted in Catholic tradition, said Monsignor Arthur B. Calkins, an American priest working at the Vatican who has written extensively on the subject.

“The church has been meditating on this role for two millennia,” Calkins said in an interview, “and so the Holy Spirit continues to draw forth what is there already in seed.”

Rocca also cites Steubenville theologian Mark Miravalle, a longtime proponent of the coredemptrix dogma, who says “the new dogma would mean the “climax of the `Age of Mary’,” a period that began in 1830 with apparitions of the Virgin in France, and witnessed papal proclamations of her Immaculate Conception (1854) and bodily Assumption into heaven (1950).”

Me, I don’t see it in Benedict’s writings; indeed, if John Paul II, who actually used the “co-redemptrix” phrase, didn’t do it, why would Benedict, who is not nearly as “Marian”? Besides, in 2000, Cardinal Ratzinger flat-out nixed the idea, adding that the “formula `Co-redemptrix’ departs to too great an extent from the language of Scripture and of the (church) Fathers and therefore gives rise to misunderstandings.”

Then again, this so-called dogma (seemes like straightforward heresy to me) has been hanging around for a while. It was bubbling up again a year ago, as Cardinal Luis Aponte Martínez of Puerto Rico told ZENIT in March 2008 why the dogma should be proclaimed. In May 2008, Cardinal Telesphore Toppo of India said the dogma would aid ecumenical dialogue.

Color me skeptical. Then again, if Benedict did this it would solidify his legacy as the greatest innovator since…I don’t know who.

PS: While I might disagree with the proposed dogma, it does allow me to post an image of one of my favorite paintings of all time, Titian’s Assumption in Santa Maria dei Frari in Venice.