Over at PoliticsDaily.com, Mary Ann Glendon’s daughter, Liz Lev (at right), has penned a tart defense of her mother’s decision to decline the Laetare Medal from Notre Dame–the highest honor given an American Catholic–because she would share the stage with Barack Obama and thereby become “a warm-up act for a grotesque twist on a reality show…”

Lev, who is a PoliticsDaily contributor (and an art historian in Rome who writes for conservative outlets like Zenit.org and “Inside the Vatican” magazine), wrote her piece in response to a PoliticsDaily column by Kaitlynn Reily, who is about to graduate from Notre Dame. Reily’s column seemed fairly mild to me, but then again she wasn’t writing about my mother. This seems to be the section that irked Liz Lev most:

“Glendon, like many others who have spoken out against the Obama invitation, opposes Obama’s pro-choice stances and decisions. But Glendon has been trained in diplomacy. Shouldn’t being in the same place and engaging someone of an opposing view be right up her alley? Wouldn’t the better decision be to use her platform — or at least her proximity — to persuade Obama to change his views? Her diplomatic style seems to be less suited for U.S.-Vatican relations and more for U.S.-Cuba relations.”

Lev was not amused, and contrasted what she called Reily’s “facile” and “reductive” take with her mother’s prayerful, deliberate decision not to appear with a president who she says “has worked tirelessly to undermine Professor Glendon’s lifetime of work”: 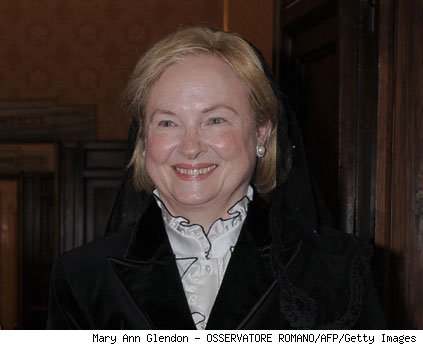 “Your notion that her ‘training in diplomacy’ might somehow ease this situation does not take into account that she has a five-minute acceptance speech and he will have a lengthy commencement speech. There is no ‘engaging’ here. Diplomacy generally teaches that if you have a rapier and your opponent has a missile launcher, try not to engage.”

“That Professor Glendon ‘did not like that Notre Dame was claiming her speech would serve to balance the event’ is again facile and simplistic. What is there to like in being the deflector screen for inviting a profoundly divisive figure to give the commencement speech? What is likeable about a Catholic University named for the most important woman in Christianity exploiting a woman who has already dedicated her life to protecting the Church’s teaching by turning her into a warm-up act for a grotesque twist on a reality show?”
“Finally, after 50 Catholic bishops condemned the university for its direct defiance in honoring a man in open conflict with the Church’s teaching, it is right that Professor Glendon let her silence speak louder than her five-minute allotment of words would have.”

That last bit I’m not so sure about, but then again, we’re not talking about my mother. My other quibbles: It was also the protesting bishops, starting with Bishop D’Arcy of South Bend, who publicly pressured Glendon to accept and be their voice (because they refused to go) in reaction to Obama. Moreover, 50 bishops (by Lev’s count) have protested the Obama invitation to one extent or another. But there are more than 285 bishops in the U.S. What about the others? Also, there are other issues besides those raised by one column. But I’m sure we’ll hear more. And more. And more.

read next post
In praise of (Benedict's) folly...
archives most recent
More from Beliefnet and our partners
previous posts