‘Hotel Transylvania 2’ is Full, But Feels A Little Vacant

When Hotel Transylvania came out in 2012, it was a delightful surprise about Dracula opening up his home as a hotel to monsters everywhere who have been in hiding for centuries. Drac had teenage daughter, Mavis, who was getting restless and wanted to spring her bat wings and see the world outside of the castle. What’s a vampire dad to do? Yes it was silly fun, but it also had a lot of heart too. In fact, it was a monster movie masquerading as a moving about a father letting his little girl grow up.

Hotel Transylvania 2 picks up a year or so later and covers the span of five or six years in less than an hour in a half. Vampire Mavis, (Voiced by Selena Gomez), marries her human boyfriend, Jonathan, (Andy Samberg), and we get to meet his parents Mike (Nick Offerman) and Linda (Megan Mullally). The wedding is held in the hotel of course. Next, the happy couple pull Dracula (Adam Sandler) aside to tell him that he is going to be a grandpa. He’s thrilled. Soon, the whole castle is baby-proofed. At Dennis’ one-year-old birthday party, Eunice (Fran Drescher), Frankenstein’s wife, gets a mild scolding for giving the baby a “My first guillotine” where losing a finger is part of the fun. But by the time Dennis turns five, he is still not showing any signs that he’ll become a full-fledged vampire. Drac thinks that he is just a “late fanger,” but he can’t help himself from constantly checking or testing Dennis.

When Dracula convinces Jonathan to take Mavis out on a trip, he grabs his friends Frankenstein (Kevin James), Wayne the werewolf (Steve Buscemi), Griffin the invisible man (David Spade), Murry the mummy (Keegan-Michael Key) and Blobby together so that they can show Dennis what being a monster is all about with typical failures. And then there is the surprise visit by Great Grandfather Vlad (Mel Brooks) who is not as “hip” and “understanding” about mixed marriages with human let alone grandchildren who are half human and half vampire.

The press release for the film says that “things are going to get batty!” and boy do they. Unlike the slightly slower-paced first film, this movie’s zips past all these different life events without giving the time and attention they deserve. The film could have made room for a few moments of heart-string pulling and tender interaction with the characters, but instead, it acts like it has a race to win leaving very little time for character development. What really would have made this feel a lot better is if the makers took their time and slowed the story down a bit. There was so much potential with the in-laws meeting each other, but instead, they just rushed through it and relied more on pratfalls and bathroom humor.

The last quarter of the film feels tacked on with Great Grandpa coming for a visit with a demon by his side. It causes some utter chaos, but not much else.

It could and should have been more of a family film instead of being reduced down to a kiddie flick. That’s not to say that it doesn’t have some great lines – it does. Like when the human runs into Dracula and says, “I love your chocolate cereal!” There are a lot of one liners like that, which is fun.

Finally, the film’s biggest lost opportunity was to cash in on the concept of “you are good enough just as you are” but instead, (spoiler alert), little Dennis becomes a vampire in the end making everyone happy. Wouldn’t it have been better if Dracula and Vlad could see the young one’s worth even if he didn’t meet their expectations? Instead, the filmmakers decided to go with a cheap out.

Now, maybe I am over-thinking it a bit. My son thought that the whole thing was great and honestly, compared to a lot of what passes for children’s entertainment, these days, this is still a pretty good flick. 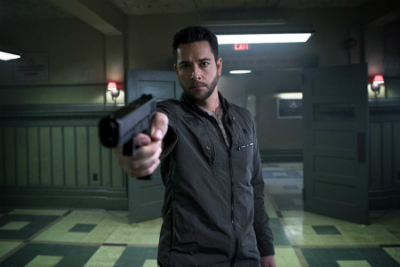 Is 'Heroes Reborn’ a Christian Commentary?
archives most recent
More from Beliefnet and our partners
previous posts