Last year’s GRAMMY Awards made headlines for all the wrong reasons. Each GRAMMY special is usually a weird mix of every music genre with some performances more memorable than others. This year’s presentation was much more calmer and dare I say, classier in comparison?

The night began with a trip on the Highway to Hell with AC/DC’s first GRAMMY performance ever, which made some of us concerned about what we were going to see this year. Madonna’s performance began with an army of horn-wearing male dancers which looked like another tribute to the devil, but instead, they were resprenting a herd of bulls and Madonna a matador. She sang her new single, “Living for Love” which was surprisingly uplifiting. At the end of song, she was joined on stage by a choir of gospel singers and Madonna was hoisted up into the air. The only thing really offensive was the tacky introduction by Miley Cyrus and Nicki Minaj.

One of the night’s more clever performances was that of Pharrell Williams and Hans Zimmer performing Williams’ “Happy,” which also won the best pop solo performance. They took the theme song from the animated Despicable Me and gave it a classical touch. Other performances included a tasteful performance by Lady GaGa and Tony Bennet (who won for Best Traditional Pop Vocal Album) and a duet with Jessie J and Tom Jones singing “You’ve Lost That Lovin Feelin.'”

About halfway through the show, a message was given from President Obama about violence toward women. A survivor of domestic violence then spoke briefly before a beautiful performance by Katy Perry singing the song, “By the Grace of God,” which is ironic since Perry has made it clear that she no longer believes in God.

To see the full list of winners, go to Grammy.com. 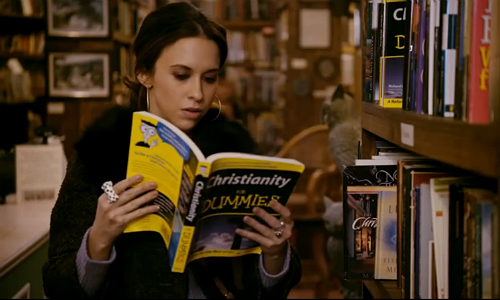 'Christian Mingle: The Movie' is Better than the Title Suggests
archives most recent
More from Beliefnet and our partners
previous posts