You might be surprised by many things with the upcoming faith-based film, “Grace Unplugged.” Two of them are starring in it.

James Denton, star of TV’s “Desperate Housewives” and Shawnee Smith from “Saw” and Charlie Sheen’s TV comedy, “Anger Management,” play the married parents of Grace (AJ Michalka) in the new film. A choice some filmmakers would not have chosen.

“I don’t know why they came to me, but my manager got the call and discouraged me from taking the meeting for all kinds of reasons. I said, ‘You know, my mom spent her life working for the church and I grew up in the church and my dad was a deacon his entire life and I think that  they would want me to do it,’” said Denton at a recent press round table event.  “I’m fascinated with the idea of doing a Christian movie if it’s a good one.”

After talking about faith and entertainment for three or so hours, Denton was sold. Not surprisingly, Denton’s manager was not thrilled with the actor’s choice to star in the movie. When he asked Denton how much the film would be paying him and when he would be starting the project, he replied, “I have no idea, but I’m doing it.”

Denton plays Johnny Trey, a former one-hit-wonder rock star whose life of alcohol and drugs nearly destroyed him, so he pushed his past behind him and became a worship pastor. Grace, his daughter, has his same passion and drive for music and wants what he had. The two butt heads. Between the two is Michelle (Shawnee Smith), a caring and loving mother and pastor’s wife. Not exactly the role most would have pictured her to play in.

“I don’t really care,” Shawnee says bluntly but honestly. “So much of life is just talk. At the end of the day, you’re just serving the higher thing.” For years, Smith played the ditzy receptionist on the TV show “Becker” with Ted Danson and has appeared in a few of the “Saw” films. The role of Michelle is about as far as you can get from her previous parts.

The actress is receiving some great praise in her first real mature role. Instead of just a sideline character, Smith aspired more for the role, making Michelle a stand out rather than just a bland, one dimensional character. “It would have been that way with a different actress,” says Denton. “When I read it [the script] I was not sure. But when I saw [Shawnee’s acting], I was like ‘Holy Wow!’”

James also has his share of critics wondering what he’s doing in a faith-based movie. “I get this question a lot from friends who are Christians asking me how did I rationalize being on ‘Desperate Housewives’ when [I’m] a Christian, says Denton. “ If you are depicting life in a way that is somehow more than just entertainment, then it’s a lot like turning the mirror on real life. If people can learn something about life and human nature, then there’s a lot to be gained from that spiritually and practically.”

Regarding “Housewives,” Denton saw the show as a morality tale, in that the characters were never “rewarded” for their bad behavior and redemption was shown in many of the episodes. Still, not everyone agrees. “I know that there are Christian producers, some really successful ones, that have done some recent, very popular faith-based films that only work with Christians and who would never had cast any of us. At least, that is what I heard, says Denton. “And so, it did cross my mind that people might say, ‘What do you think you’re doing a Christian movie? You’re from “Desperate Housewives.”’ But you can’t worry about. I know what my intent was.”

Shawnee adds, “I wouldn’t have been working with them and I wouldn’t really care to be working with them. For this movie, everyone was always serving the higher [purpose]. The intentions were true. We were just serving the truth of it. It’s very simple you know, love and truth. It was such a freedom to serve that.”

Asking Smith what is was that drew her to the role, she says, “I loved the character of Michelle and I thought, if my daughter grew up to be this kind of a woman, I would be thrilled. And it’s a movie that she can actually see, which never happens,” she laughs. “She usually has the walk through the production offices with her eyes on the ground.” Believe it or not, Smith homeschools her daughter and tries to protect her from bad outside influences. The message of “Unplugged” really resonates with her. “This is a movie about a family in the ring. It just brings me to my knees. These people just staying in the ring fighting for each other – for love, for truth in the most real way.”

However, when Smith decided that she really wanted to do the role, others had different thoughts. “Then the producers where scared.  They Googled me and thought, this isn’t going to work. And then I was a little indignant. What kind of Christian way is this? Who was Jesus hanging out with, you know? Then of course, I put my ego aside and thought this is not how this ends. We got all the business people aside and took them over to my house with my kids. We all got together and three or four hours later they said, “Oh, so this more like who you really are!”

Why was this role so important to her? “Michelle is someone I aspire to be. My personal life is rather small and those are the goals. I wept through most of the movie because I’ve been there. I thought Brad [Silverman, the director] did a brilliant job of presenting what is dead and how it looks alive. [Dead things] look powerful and shiny and what is alive looks kinda boring and frustrating. “I’ve seen this woman and I know enough about how much of a treasure this woman is. She has the self-control to be respectful of her husband and have faith in God, even when in that moment [in the film] when she says to her husband, ‘What are you going to do? Drag her back home?’ The rawness of that moment and the terror that’s underneath…It’s a very powerful movie and I hope that everyone sees it.”

“I was excited to do this as this is the world where I come from,” says Denton. “My first job out of college was a minster of music so I know these people really well and have a lot of respect for them. The life they live and how they raise their kids. Why preach to Christians?” 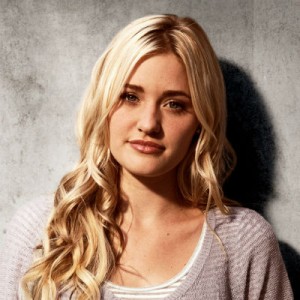