Kick in the Tush Tuesday: It’s NOT About Your Fat; It IS About Your Life

Just the other day, I was talking to a client and sharing the metaphor some of you may have read in my book All Is Forgiven, Move On or heard me speak about on the radio. I thought it worth reviewing today and taking it one step further.  Ready? Good!

Have you ever watched an Olympic swimmer push off the side of the pool? It is quite amazing, isn’t it? The thrust, the power, their determination is enormous. Often the strength of this one solitary push can propel the Olympian right straight into the middle of the Olympic-sized pool.

When we decide to go on a ‘diet,’ we essentially push off from the side of the ‘pool of discontent.’ We gather a vast amount of energy from not liking ourselves, being disgusted, and ashamed of how we look. We don’t like ourselves; do we? No, we sure don’t.

Unlike the Olympic swimmer who has a plan; who is moving toward her big win; who sees herself as a champion and knows with every cell and fiber of her being that she is the victor, we only know ourselves to be losers. We are basing this attempt on past attempts to lose, which have failed.

The diet and exercise plans do not live alone. This is a holistic event.

It’s about your life, not your fat.

Where are you going?
What is your compelling future?
It’s not about just losing weight, is it?

No one I know has ever woken up and said whoopee, “I’m fatter than ever. Think I’ll go on a diet!” Moving toward something or being for something is far more motivating and powerful when it comes to inspiring change than pushing away from something. Think about that for a moment in terms of your inspiring your own change and motivating yourself.

When moving toward something, as if by magic, a compelling energy ignites. The powerful energy flows from your constructive core; from your positive intentions.

I know I am repeating myself; but I really want to make this point.
You are bigger (in the best possible way) than you.

What are you for?
How will you move toward it today?

Yours in Living Life to the Fullest (without stuffing yourself),
Janny 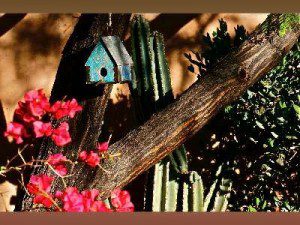 Puzzled? Go Outside, Smell the Dirt, Be Happy!
archives most recent
More from Beliefnet and our partners
previous posts