Why blog about breast cancer now?

I had not expected to blog about Breast Cancer and didn’t until several years after my initial diagnosis. When you’re being treated for breast cancer you are mostly in a reactive state. You’re really carried along like one of those dance numbers where smartly dressed men in suits hold you aloft.

It wasn’t until afterward that I got a chance to catch my breath, when the drama receded. When it’s not such an emergency and instead of thinking about dying all the time you start to think about how you’re going to live.

Now what? The truth is having had cancer in some way informs everything you do, from the smallest blueberry that you eat with the hopes that its antioxidants will tip the scales in your favor, to the relationships you have and don’t have. Everything is reevaluated.

For me I kind of skipped through cancer because I was so supported and then when I had to step into my day-to-day life, I really felt the impact like an aftershock. I was a writer before I was a blogger and that is how I process my experiences so it was a logical step for me.

What is different about blogging then writing fiction or television?

I really didn’t anticipate the strong immediate response I’ve gotten from readers that were not women with cancer. I began by writing with my cousin and other breast cancer patients in mind. I thought it might speak to them and reduce the fear of someone at the start of their journey.

But the readers who seem most interested in the blog are people whose mothersisterwifefriend has had cancer. I think it gives them a window into the experience they may not have had. Also, the humor is an important part of my worldview. I swear that at the start of my treatment I actually googled “cancer humor” and was shocked and appalled to find nothing. We have done a lot of laughing on this journey. I would very likely be bitter and angry were it not for my ability to see what is funny about it. No, really.

Also, there were people who discouraged me from being public about my cancer status and that just seemed wrong to me. I know that I have the ability to make this less frightening to other women and nothing would stop me from doing that. Also it’s a truth about me, the same way that I stopped coloring my hair (when it grew back) and people respond so positively to that. I think you are always safer in the world if you lead with who you are.

How has it affected your faith?

My faith was not really tested by cancer. That is to say my belief does not have god in it.  I have a strong belief in how we treat each other as human beings. That we have the ability to enact godliness towards one another. Having said that much of how I have healed in this process was brought about my religious practices and values.

The members of my temple and my community stepped forward to feed my family and to care for us as we have done for other people when they have needed our help. In the same way the ritual of a Sabbath and setting aside a time for rest and to celebrate by eating special foods and drinking wine was very much what was called for in this experience. Much of this value emerged as I wrote the blog. I don’t take cancer personally or feel that it has meaning in that way.

People will occasionally post that anger will give you cancer, and I’m only really angry at the people who post things like that. Cancer is just cancer – it’s like saying that if a car loses control and hits you while you walk on the sidewalk that there’s a reason for it– the reason you have cancer is that you were walking down the street and your cells spun out of control – done.

How did you keep from being afraid?

I wasn’t terribly afraid for myself. I don’t like hospitals or enclosed spaces, but I have Ativan for that. I felt confident in my doctors and ,I was love bombed.

More than anything I was really concerned about my kids. I had done a pretty good job of keeping their world relatively safe, and then I had to spring this on them. Als,o I didn’t want me dying to become part of their story. I have known a lot of people who have lost their mothers to cancer, and I was worried for my kids in this way. The truth is they are very much in their own lives, but I want to be there for them if they needed me, to jump on a plane or answer the phone or just sit with them, for as long as I could.

I do know women who did not have the kind of medical coverage I had and had to be fearful about money in a moment when they were dealing with a cancer diagnosis, which is unconscionable as far as I am concerned. When I’m done here, I’ll blog about that.

How do you cope with the change of energy?

That’s been hard for me because there is so much I want to do. I have had the wish like Calvin and Hobbs to have a fleet of clones running around doing my bidding. I have to take naps, but the truth is I have always done that. I haven’t really scaled back what I wish to accomplish, but I have to be really disciplined about how I expend my energy.

I have long joked that I should keep a stack of post-it notes with the word NO on them next to the phone so that I don’t over volunteer. I just have to work smarter and be a little more princessy. Waking me during a nap is a hanging offense.

How do you control your thoughts?

I am a big fan of cognitive therapy. I would rather meet Aaron Beck* than Beck. I struggled with anxiety when I was younger and was able to really resolve it because of those tools. In terms of cancer I was helped by this skill set. I tried to not go down the rabbit hole with fear. I have learned that being afraid is not a form of protection.

Also, worry can exhaust you and to get through this you need to be fit. I have however become smart about not getting tests done on a Friday. If you do, you can devote your entire weekend to worry. I get test on Mondays and schedule follow-ups on Wednesdays. Also I live walking distance from a bakery called Big Sugar and if used in moderation, one of their chocolate cupcakes can really take the edge off.

For more information about Racelle and to write her, visit: Racelle Rosett.

For more discussion on this topic or the topic of your choice, be sure to visit a Kick in the Tush Club on Facebook!

Spread the word … not the icing!

Become a Tushkateer!  A Tushkateer is a person who receives Our Lady of Weight Loss’s newsletter, called the KICK in the TUSH CLUB!!!  Sign up and receive her weekly e-newsletter with all the news that ‘fit’ to print, and you are automatically a Tushkateer!  How cool is that? 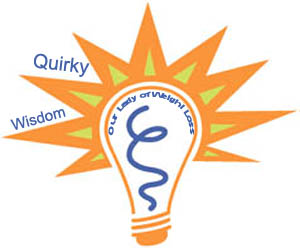 Quirky Wisdom: 5 Ways to Stop Worrying ... about what others think !!!
archives most recent
More from Beliefnet and our partners
previous posts