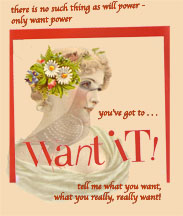 There is no such thing as willpower. If the cake calls your name, who amongst us has the willpower to just say, “no!?” We are more than likely than not to cave in and eat it! Want Power means that we want to lose weight enough to make sure that there’s no cake in the house – that we want to be thin enough to go that extra mile – to do what it takes!

Build Your Want Power Muscle from Beliefnet Blogger, Janice Taylor.
Do you know what you want?
Sometimes it is easier to know what we DON’T want rather than what we DO want. In order for you to build your want power muscle so that your want power is stronger than Popeye after a can of spinach, try this:
Before every shopping expedition, television show, meeting, phone call to family member; in other words, before every event or decision, ask yourself “What do I want?”
“What do I want?” Would you prefer to buy a black dress or a brown dress? Did you want to make low-fat pizza for dinner tonight or a mammoth chicken salad? Did you want to watch “Weeds” or “Big Love?” From the most mundane to the most serious of decisions, just pause and ask, “What do I want?”
Low-Wattage Light-Bulb Moments
I found this exercise extremely helpful. Almost every pause set off a low-wattage light-bulb moment. It became clear that I often went to movies that I did not want to go to in order to appease people who I really didn’t want to appease. I ate at restaurants and ordered food that I really did not want, because I did not want to annoy anyone. I stayed places way longer than necessary. Connecting to these ‘a-ha want’ moments shed some light on my under-developed want muscle.
As these little wants connected to bigger wants, my want muscle grew stronger. I was able to get in touch with my gut feelings – my emotional state as well as the physical sensations that connected to really wanting something. My decision making process became a lot more fluid and stronger, and I began to clearly see what I wanted (vs. what I did not want).
What do you want?
New Point of View: There is no such thing as willpower only want power!
Spread the word, not the icing!
Janice
For second helpings of want power, join Our Lady’s Kick in the Tush Club community.
And pick up a copy of All Is Forgiven, Move On (builds want power muscles 101 ways)! 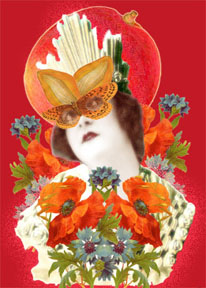