Sometimes, the worse the tragedy, the more abhorrent the theology it elicits.

Still numb from the overwhelming evil perpetrated against helpless children and schoolteachers last Friday, now we have to read idiocy from James Dobson and others who declare the senseless carnage a sign of God’s judgment against America. His words are disgraceful. I find them exploitative and unchristian.

Certain Christians seem compelled to speak for God in disorienting moments like these, and the results are frequently terrible. The rest of the church has a responsibility to get angry and repudiate the statements.

In times like these, I find myself wanting to disavow anyone’s attempts to speak on God’s behalf.

That might sound strange coming from me, since I’m a New Testament scholar and an ordained Presbyterian leader. I regularly encourage people to talk about God and assess — both critically and creatively — their and others’ ideas about who God is and how God operates.

What disturbs me is when this talk slips into precision or definition. Into absolute confidence about God and how God might be or not be connected to our current circumstances.

The long history of theology — whether in formal “academic” settings, around coffee urns in fellowship halls, or in online forums — reminds us of an ever-present temptation to pretend that a speaker or another source enjoys direct, uncluttered pathways into the mind of God.

Christians have made horrific mistakes in our statements about God’s will and God’s ongoing activity in the world. Yet, at the same time, I cannot read this history as one-dimensional; for I have seen — firsthand and throughout the past — people of faith achieving very positive results. Many people who describe themselves as responding to God accomplish great feats of love, compassion, and social change.

This makes me think of Mary.

“Surely, from now on all generations will call me blessed; for the Mighty One has done great things for me, and holy is his name…. [God] has shown strength with his arm; he has scattered the proud in the thoughts of their hearts.”

— Mary, the mother of Jesus, in Luke 1:48-51, explaining what it means for her to be pregnant with the Son of God

As Advent concludes, many Christian worship services will include Mary’s words from Luke 1:46-55, traditionally called “The Magnificat.” The speech, usually cast as a prayerful song, is her response to her surprising pregnancy and her extraordinary child.

Mary’s song indulges in a kind of biblical sampling. She recites few new phrases but instead borrows widely from her scriptures, quoting and linking themes and passages from the Old Testament. In piecing together these longstanding statements about God, she makes fresh declarations. In connecting these old words to her new circumstances, she makes claims about God’s activity in the present tense.

It’s bold talk about a God capable of upending societies and governments, a God who inverts the usual state of affairs.

Mary insists that this powerful, merciful God isn’t merely an abstraction. This God is active in her current circumstances (verses 47-49). Mary names her own obscure and potentially shameful pregnancy as a piece in a larger, worldwide drama.

Mary interprets her present moment in light of who she understands God to be, in terms of God’s past history, God’s intentions, and God’s promises for the future.

In this way, she shows us how to speak about God in the here and now. She recalls established convictions about God’s character. And she imagines the possibility of God bringing a new future into being — not in a distant time, but beginning now, all around her, in her experience, even within her body.

Maybe this is acceptable for a figure in the Bible. (Although if we belong to the group of society’s “powerful” seated on “thrones” of some kind, Mary’s song might give us pause this Christmas.) But can Mary’s song invite us to talk about God being active among us?

“I think God would say to us, ‘Hey, I’ll be glad to protect your children, but you’ve got to invite me back into your world first. I’m not going to go where I’m not wanted. I am a gentleman.’”

— Bryan Fischer, December 14, 2012, answering the question “Where was God?” on the day of the shootings at Sandy Hook Elementary School

“I really believe that…all of [the liberal groups that] try to secularize America — I point the finger in their face and say, ‘You helped this happen.’”

— Jerry Falwell, September 13, 2001, describing the events of 9/11 as God beginning to “allow the enemies of America to give us probably what we deserve”

How does Mary’s song not set us on a slippery slope? What is to keep us from becoming like those in the national spotlight and in our communities who name natural disasters, violent atrocities, and financial meltdowns as consequences of God’s displeasure with human behavior?

The first involves widening the conversation. How do others help us test our theological hunches? I don’t mean gathering more people who already think like we do. Rather, people of faith must test their ideas about God with others who are unlike them.

Mary’s song may look self-serving at first glance. But remember: she employs established claims from her religious tradition. She is in conversation with people of faith from preceding generations.

Also, and more important, Mary doesn’t speak solely about her own importance and future. She speaks on behalf of “the lowly” and “the hungry,” groups whom she represents. Groups whose well-being must be considered in all our statements about God and God’s priorities.

Beware of any who speak about God in ways to suggest God has little regard for the powerless. Mary has countless allies across the Bible who echo her convictions about God’s unshakeable concern for the vulnerable.

The second safeguard is patience. Any statement about who God is and how God might be glimpsed or known must be tested by time, so it gains perspective. Theology benefits from the clearer, or safer vistas that hindsight allows. Speaking about God typically involves looking backward into time to consider: did we encounter God (or did God encounter us) in that moment?

Mary’s words in Luke’s Gospel are probably not the speech of an unmarried girl contemplating her pregnancy. More likely, the author of the Gospel composed them as an interpretation of Mary’s situation. This is not to diminish Mary’s value or faithfulness; but it is a reminder that the author was looking retrospectively at Mary’s pregnancy, viewing it through a post-Easter lens to express a confident hope that God’s Messiah would yet complete the task of upending the world’s oppressive ways.

Be very suspicious, then, of theological statements that promise too much insight into the present. Theology that tells us what God is doing right now, and that definitively claims to understand tomorrow, usually is manipulative theology.

It’s not that we have no confidence in contemplating God’s future, or ours. But God’s future will be informed by who God has been in the past. Our talk about God should begin there, then.

“We light the Advent candles against the winter night.”

— Opening line of an Advent hymn composed by Gracia Grindal

In the end, Mary’s song remains outrageous. When the Gospel of Luke ends, the powerful remain on their thrones, and the rich have not been left empty. No historical event unambiguously confirms her claims; they remain statements of faith.

Advent is like this for Christians. It’s a season of standing up against “the way things are.” Advent rejects the assumption that humanity remains trapped in never-ending decline.

Christians (at least, those in the Northern Hemisphere) light candles “against” the expanding December night. Our tiny, vulnerable flames pose no threat to winter’s natural wildness. But we light them anyway, because they declare a different reality to come.

“Joy to the World” will not sound the same this year, not after funerals for twenty beautiful children and their adult defenders in Newtown, CT. The carol, in declaring the “wonders of [Jesus’] love,” will sound fake to some. Ignorant to others. And in some places, hopeful. But I plan on singing it a little defiantly — not in naïve, Pollyannaish hope, but in confidence that Mary, the author of Luke, and those before them who dared to speak about God saw with a perspective I can learn from. 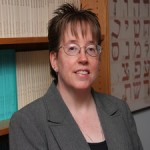 On the Fiscal Cliff with John the Baptist: Luke 3:7-18
archives most recent
More from Beliefnet and our partners
previous posts