This story leaves us wondering and longing for more. Mark’s Easter gospel (Mark 16: 1-8) ends with silence rather than “Alleluia!” That wasn’t the word the women said at the end of their long night of waiting. That’s not what they said when the Sabbath was over as they made their way to the tomb. They had been there on Friday when Jesus died and the sky turned dark at midday. Mark remembers all three women by name: Mary Magdalene, Mary the mother of James, and Salome. They looked on from a distance when Jesus was crucified. Mary Magdalene had been there when Joseph of Arimathea wrapped Jesus’ lifeless body in linen and laid him in the tomb. They asked a pressing question as they walked toward the grave: “Who will roll away the stone for us from the entrance to the tomb?” When they neared the tomb they saw that the stone had been rolled aside. But even then, they didn’t shout Alleluia. Even after they heard the young man in white tell them that Jesus had been raised, they didn’t shout “Christ is risen!” That’s what we want them to say, but they didn’t behave as we would like. They fled from the tomb for “terror and amazement had seized them.” The words are even stronger in Greek: tromos – trauma, and ecstasis – ecstasy. Trauma and ecstasy had seized them. They said nothing to anyone, for they were afraid. Mark’s gospel ends in silence and Jesus never appears.

It didn’t take long for others to add new endings, endings where Jesus did appear to Mary Magdalene and finally to the eleven disciples. Those endings are usually printed in italics or in brackets in most Bibles. People couldn’t stand the silence. Besides, the women must have told somebody or Mark would never have known the story. What if Mark wanted to end with silence? Surely, he knew the story. He had heard the story passed down from those who knew Jesus to those who now gathered in Jesus’ name. Mark wrote his narrative so the story would live beyond that generation of eye-witnesses. Mark wrote in a time of trauma, shortly after Roman armies had squashed a Jewish rebellion, destroying the temple and much of Jerusalem. Jews were killed by the thousands and those who followed Jesus from Nazareth were increasingly persecuted. Mark wrote this gospel for those who had never seen Jesus nor heard him speak. Mark’s silence is for them, a silence that honored their present trauma. This is a silence that also acknowledges how impossible it is to put ecstasy into words.

Mark’s silence is also for us.

Of all the Easter gospels, Mark’s story invites us to stand where those first trembling witnesses stood. Those three women didn’t see Jesus. Neither do we. They didn’t hear Jesus call their names. Neither have we. They weren’t invited to touch his wounded hands. We haven’t touched Jesus’ hands either. Mary Magdalene, Mary the mother of James and Salome are our silent sisters. The narrative is left for us, the readers, to complete.

…the silence of the last disciple characters surviving in the narrative bring the readers and hearers to their own thresholds of faith, to the limit of words to speak the unspeakable…and to the limit of human experience to trust Who or What is beyond death…In our foremothers’ silence, the narrative still calls the disciples of the next generation to speak for themselves, and bring the gospel into dialogue with their lives. (Joan L. Mitchell, Beyond Fear and Silence, 115)

These three women can be our guides for telling the story and speaking words of faith. They can help us to bring the gospel into dialogue with our own lives. Mark couldn’t have done this because he didn’t know what our lives would be like. Between the women’s experience at the empty tomb and Mark’s writing, these three women did speak – or we wouldn’t know the story. They went back home to Galilee as Jesus had invited them. Whatever they said to the disciples, their testimony was shaped by those two words: trauma and ecstasy. This was not a testimony so absolute that it cancelled other possibilities. This was not a word that demeaned the experiences of others. This was not a witness that proved they were right and everyone else was wrong. The testimony that grew from their silence was always invitation rather than coercion.

How will we tell this story? Will we leave space for those whose stories are different from ours? Will we insist that we alone are right and others are wrong? Will we invite them or coerce them? Mary Magdalene, Mary the mother of James and Salome stand beside us today. In their silence they remind us that the life of faith is shaped by trauma and ecstasy, trembling and amazement. The silence at the end of Mark’s gospel is always waiting to be filled in by people of every generation, waiting now for you and for me.

In Mark 16:7 an angel tells the women at Jesus’s tomb to “go, tell.” Christians in the 21st century are using new tools to “go, tell” and spread the word. Internet and social media use are on the rise in congregations across the country. Using information from the Pew Research Center’s Internet & American Life Project and Dr. Scott Thumma’s report, Virtually Religious, Odyssey Networks examines the intersection of Christianity and new media. 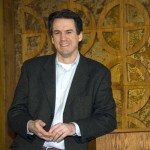 Mark 14:1-15:47: What Jesus’ Death Tells Us About Ourselves
archives most recent
More from Beliefnet and our partners
previous posts