Readers almost always gravitate to the same question. Why do Simon and Andrew, then James and John after them, abandon everything to follow Jesus? Mark leaves no doubt as to the immediacy of their response. Seeing Simon and Andrew casting for fish, Jesus says, “Follow after me, and I will make you to be fishers for people.” And immediately, Mark emphasizes, they leave their nets and follow Jesus. Likewise, Jesus immediately calls James and John while they are mending their nets. These two abandon their father in the boat with his hired workers to come after Jesus.

Biblical stories often frustrate us by refusing to provide all the details we desire. John Grisham would do better. If John Grisham had written Mark, we’d overhear a little dialogue between Simon and Andrew concerning Jesus. Stieg Larsson would have accompanied James and John through their morning routine. Patricia Cornwell would have clued us into the rumors that attend Jesus’ arrival. Even the author of Luke’s Gospel provides a little story that explains why the disciples find Jesus compelling. After a night of unsuccessful fishing, Simon, James, and John allow Jesus to use their boat as a podium. Jesus tells the men to put out and fish again. Simon grumbles, but an overwhelming catch of fish convinces him that Jesus is the real deal (Luke 5:1-11). No wonder Simon and his colleagues leave everything to follow Jesus! But Mark remains reticent.

We should honor the Gospels’ reticence. The Gospels will reward our patience by supplying occasional details. When we learn that Nicodemus comes to Jesus at night, but the Samaritan woman encounters him at noon, we know to pay attention (John 3:2; 4:6). After all, the Gospel tells us that to mind the distinction between those who love darkness and those who come to the light. Our ears likewise perk up when Jesus has the crowd recline on the green grass (Mark 6:39). “They were like sheep without a shepherd,” Mark tells us (6:34), and we remember: “The LORD is my shepherd. . . . The LORD makes me lie down in green pastures” (Psalm 23:1-2). So when Mark refuses to tell us just why Simon and his colleagues abandon their former lives to follow Jesus, we hold our questions for later. But we do not forget them.

Watch the Video: The Gift of Service

After fulfilling careers, seniors Nancy Cafferty and Sayyid Tirmizi are committed to giving back. In exchange for a small stipend from a non-profit, ReServe, the former museum finance director and professor assist library patrons with their job searches in Jamaica, Queens. ReServe helps nonprofits, schools, and public agencies fill skills-based, part-time positions with experienced professionals.

If we choose to see it, Mark may provide one clue. Jesus’ encounter with his future disciples represents Mark’s first report of an act in Jesus’ ministry. It follows immediately after Mark’s summary of Jesus’ activity. Marching into Galilee, Jesus preaches a single distinctive message, the gospel of God: “The time is fulfilled, and the kingdom of God has drawn near. Repent and believe the gospel!” (1:15, author’s translation). Jesus is saying something like, “God has broken into the world” – that’s good news – “you’d better shape up and believe it!” If Simon and his colleagues know what we know, they’re aware that Jesus is calling everybody to “reshape” their lives (following Clarence Jordan’s Cotton Patch translation). They’re just receiving special attention.

Many of the seminarians I teach can relate to Simon, Andrew, James and John. Their decision to enter full-time preparation for ministry may stretch out over decades, but the actual transition from professional or domestic life to full-time study usually comes as a shock. Seminary students vary in age from twenty-one to seventy-one, and our students have included lawyers, nurses, laborers, professors, and administrators. Sensing that God has indeed broken into their world, they put many things on hold, a decision that often stresses spouses and children. And they set off, seeking something different, something compelling, a path worthy of their lives.

Jesus’ four new disciples lived in a tough world. Jewish aspirations for freedom confronted the grim reality of Roman imperial exploitation. Families lost their land. Children scattered in search of work and opportunity, often finding themselves enslaved by poverty. Traditional family and village structures crumbled under enormous cultural and economic stress. A very few people amassed incredible levels of wealth in Jesus’ day, while countless others found themselves destitute. Those realities impinge upon Simon and Andrew while they fish; James and John sense them as they repair their nets.

Lots of motives influence people who exchange their old lives for new ones. Harsh new economic realities are forcing people to retrain, restructure, and reorganize. Even Mitt Romney says he knows the fear of the pink slip. Countless people are leaving their old lives – or finding their former lives slipping away. What commitments convince us that they are worth living for?

Ancient philosophies often built their ranks from those persons who found ordinary life unsatisfying. According to Diogenes Laertius, Socrates encountered a young man named Xenophon in a narrow passageway. Blocking the path with his stick, the philosopher asked where he might find various kinds of food. Then Socrates asked, “And where do people become good and honorable?” With Xenophon looking perplexed, Socrates called him: “Then follow me, and learn” (Lives 2.48).

It still happens. My friend Selina Man owns a small chocolate-themed restaurant in Lititz, Pennsylvania. With a Princeton Ph.D. in economics, she found herself unfulfilled by Wall Street’s big money. So she abandoned that life for the global Fair Trade retail business. After a year of that, she founded Café Chocolate with a business model that emphasizes full participation by employees, environmentally friendly cooking, and economically just business practices.

And some people abandon their nets because they hear good news worthy of our lives. If things were just fine in the world, perhaps they’d stay with their nets. But sensing God’s kingdom drawing near, they reshape their lives in response to God’s call. They drop everything and go another way. Far too few churches ask this question, this vocational question, of their members: to what life is God calling you? And far too many of us domesticate the question, as if Simon and his colleagues were just volunteering for a single night at the winter shelter. The realities of our world press us with questions greater than how we’ll spend a given night. Meanwhile, the kingdom of God lies right at hand. And what about those nets? 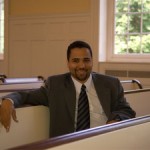