Pat Robertson’s Comments, The Earthquake in Haiti and Karma 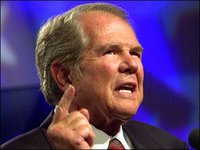 Did anyone see TV Evangelist Pat Robertson’s comments Wednesday on the Earthquake in Haiti, from which it is believed a death toll of more than 100,000 people may come? He called the event a possible “Blessing in Disguise,” and linked the tragedy to a “Pact with the Devil” the Haitian population made long ago. His representatives released a statement on Haiti later backing away from the comments. Wow.

At the same time, I have been pondering the situation in Haiti from the
perspective of karma, or cause and effect. The simple question I keep
turning over is why do desperately poor people keep getting screwed
karmically?

In the Buddhist tradition that I practice and study, karma is the study
of habitual conditioning in the mind, and the relationship between our
minds’ perceptions and how the world “out there” appears to us. That’s
all it is. That’s actually plenty for it to be, because examining our
habitual mentalities and perceptions takes a whole lifetime.

1. Karma is An Invisible Boomerang – and what goes around comes
around (which is how I interpret Pat Robertson’s Pact with the Devil
comments). It is not nearly as simple or one-to-one as this, because
interdependence causes us to live in a huge web of causality.

2. Karma is a Cosmic Bank Account Somewhere – this is a subtle
and deeply materialistic view, and it’s not surprising that the
dominant view of karma in our society attempts to commodify it
spiritually, rather than use it as a way to look deeply at our own
acquired habits.

3. Karma is a Way to Play The Blame Game – The idea that when bad things happen, karma allows us to place blame on the victim. “You were robbed at gunpoint solely because of your negative actions in the past.

Robertson’s comments seem to fall into #1 and #2 here.

Still, I can’t help but wonder, heartbroken at Haiti, what these events
mean karmically. The first thing that came up for me was a feeling of
guilt. Combine that with projections on the effects of global warming
on Earth, where poor countries will be hit the hardest the soonest, and
rich countries (which created the problem), will be less effected by
climate change. In fact, some argue that the Northeastern US will
become more and more eden-like as global warming advances.

What’s up with Pat Robertson? And what’s up with poor people always getting the short end of the stick? And by that I mean, with no stick at all…

Buddhist Warfare?
archives most recent
More from Beliefnet and our partners
previous posts