Meditation Marathon and the Inextricability of Disco and Tonglen

SO much to say about the Interdependence Project 24-hour meditation marathon in the windows of ABC Carpet & Home, a high-end home furnishings store in Manhattan, this weekend.

My angle here: Was this anything more than a stunt, from a practice point of view? Here are my impressions — and my photo, below – from the inside looking out. 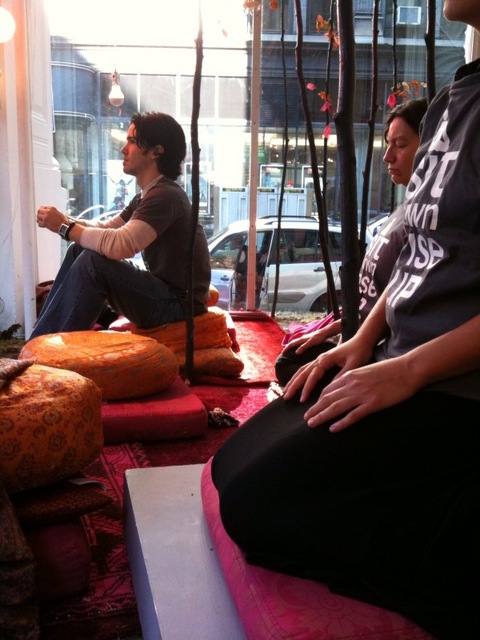 I sat for 2 shifts, totalling 8 hours, from 7am to 3pm on Saturday. First off, I am not an early morning person on weekends.

but that was minor.

Just two impressions, on the inextricability of disco and tonglen.

The first 3 hours, 7 to 10am, were fairly amazing. Sunlight on the street, passersby with dogs, the most sumptuous meditation cushions I have ever sat on (thanks ABC!) and super-lavish visuals all round me, not to mention my fellow IDP meditators, made the space a very rich one. I settled fairly quickly into shamatha, or breath awareness meditation.

Folks on the street were momentarily engaged by the windows at that hour, but there were no crowds. A fair but not tremendous amount of visual action or energy outside the window. And as an urban meditator, I am accustomed to street sounds — trucks, sirens and the like — and sometimes use awareness of them as part of my meditation anyway. Seemed to be moving along, focused, aware, open, spacious; very energized. . . . blah blah blah.

At 10am the store, (after all we were sitting in a fully functioning Manhattan department store) put on their ambient music, their soundtrack for shoppers.

I’d been sitting and walking and sitting for 3 hours by that point, and was feeling pretty settled and focused. All of a sudden, that focus was brought to bear on . . . pop lyrics.

Basically, I was all set to do some analytic, comtemplative meditation. But instead of a sutra or a lojong slogan, I got . . . Alanis Morisette. I found myself discovering depths and resonances in Alanis’s music that I never suspected. I laughed to myself, noted, “thinking,” came back to the breath.

Then “I Love the Nightlife” by Alicia Bridges discobeat its way thru the space. And she doesn’t want to talk about love tonight. She wants to go where the people dance. She wants some “Ack-SHHUN!!” To give and to get some too. She loves to boogie, she loves the nightlife, “ah AHHHHH, YEAH!”

In case you may have forgotten this tune.

Monks and teachers who instructed their students to setttle and train the mind with shamatha to prepare for contemplation and insight probably never really thought about putting that spacious mind to work on Alicia Bridges’ “Ack-SHUNN!!!”

It was impossible to miss the subtle boogieing among us meditators. Despite earplugs offered later, shamatha was just . . . different after the music started.

And the crowds started up on the sidewalks of Broadway around 11am. SO much interest, so much energy seemed to be thrown into the windows where we sat! Most of it was postive, curious; some was playfully agressive, but it was a LOT. Rather than try to ignore it or resist it I figured, roll with it.

As planned, I interspersed my shamatha with a kind of meditation called metta, or lovingkindness meditation, in which a meditator practices generating lovingkindness for sentient beings. And that kind of spontaneously turned into a practice called tonglen. You can learn about tonglen from Pema Chodron here on beliefnet, and buy some of her audio at Sounds True.

And it all felt like one big merry-go-round energy exchange. Take in darkness, whatever people don’t want. Emanate whatever they might need, without judgment. And go round and round, cuz I suspect that neither of us really need anything anyway, and the energy just goes round and round. Talk about getting to “boogie on the disco ’round!” Pretty great.

I have to say, it wasn’t like any meditation session I’ve done before, and it takes a more expert and experienced meditator than I to break it down (and say if it was meditation at all, as if felt very sensation-y and kinda like surfing) but I’d do it again in a minute.

I got to boogie! On the disco ’round. Oh Yeahhhh!

Can’t wait to hear my fellow sitters accounts of their time on the cushion, too. I think I got an idea for a new kind of meditation tape. . . . 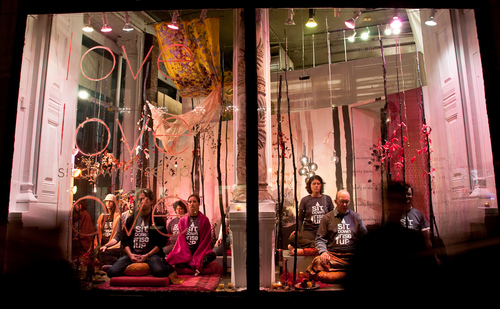 Sit Down Rise Up: Come Say Hello!
archives most recent
More from Beliefnet and our partners
previous posts