10 Of the Best Websites for Buddhism

I wake up early every morning, meditate, make coffee, write a bit and usually check out a few sites online. Besides the Interdependence Project One City blog, which I humbly submit manages to have a more relevant, lively, and consistent conversation about Buddhist technique in 21st century lifestyle than anyone else out there –   I’ve found that there are a handful of blogs and websites I always come back to. So in no particular order, here are the 10 of the best websites to check out when exploring your own practice (or just if you’re just curious about Buddhism).

I follow most of these by subscribing with the always free Google Reader; before that i just had a little folder called “Daily Reading” in my Firefox toolbar. Many of them have Twitter accounts as well.

1. How to Save the World
Dave Pollard is an extraordinary thinker who has been writing for years
about the intersection of environment, intentional community, and
personal choices and “a better understanding of how the world really
works”. There is no other writer who so consistently challenges the
limits of my understanding and causes me to return again and again to
their ideas. Dave nearly always leads to me to an “ah-hah” moment, but
sometimes it takes re-reading or marinating his essays to get it.

2. Buddhanet
Hands down the most absurdly well-stocked library of information about
Buddhism online, Buddhanet has everything from online meditation
teachings, to an evolving Buddhist eLibrary, a massive director of
Sanghas and Buddhist organizations worldwide, mp3’s of chanting,
teachings and Buddhist songs – all donation supported since 1995. This
is one of the first places I saw Buddhism being explored online, and it
is constantly being updated.

3. The Dalai Lama’s Personal Wesbite
His Holiness’  website includes audio teachings in many languages
(check out Webcasts) as well as news updates and a photo gallery that
makes me wonder why he’s never done a music video.

4. Buddhist Geeks While The Interdependence Project may have the best podcasts of contemporary Buddhist classes
available online, Buddhist Geeks is the leader in awesome interviews
with Buddhist teachers, scholars and thinkers, all of which are meant
to inspire direct action rather than just mere “flapping their gums”.
Chief geek Vince Horn did a great guest post here at the IDP blog last week that drew over 170 comments.

5. Tricycle
While Buddhist Geeks and the Interdependence Project rigorously strive
to make teachings relevant to 21st century internet dwellers, Tricycle
tends to a bit more navel-gazing, critical analysis and review. Always
thoughtful, always scented by just a whiff of Nag Champa, Tricycle’s
online magazine and their blog are where I go when I need a more
philosophical moment.

6. Kevin Kelly’s Lifestream
Back in the day, Wired Magazine was a mind-bending, thought-provoking
hotbed of thinking about how people, technology, and the physical
environment intersected. Though it’s tended toward more standard
coverage of toys and technology over the last few years, founder Kevin
Kelly’s writing about the Technium on his personal blog continues to
deliver impactful ideas on a par with Dave Pollard’s.  In his latest post,
he proposes that The Technium  (his term for the physical world of
technolgy) comprises less than 1% of all the physical atoms on earth,
yet has an effect perhaps more profound than the other 99%. The
Lifestream is a feed of all his writing on all the subjects he writes
so eloquently about.

7. Shambhala Sunspace
When Chogyam Trungpa Rinpoche brought his version of Buddhism to the
West forty years ago, he framed them as the Shambhala teachings to make
them relevant to a young American audience.   As Shambhala Sun magazine (the
physical version) continues to serve a largely older population made up
of the people who gave Buddhism its foundation in Western Society, its
blog Shambhala Sunspace is finding its sea legs as it engages today’s younger audience.  Editor Rod
Meade Sperry is doing a fantastic job, and it wouldn’t surprise me if
his work with Sunspace becomes an important part of the emerging conversation about Buddhism in modern life.

8. Illuminated Mind
Jonathan Mead’s website about livelihood, creativity, and finding your
authentic voice could easily be a pastiche of cheesy self-development
crap.  Instead, he’s managed to make lessons learned on his own deeply
felt (and ongoing) journey to self-actualization relevant to anyone
who’s ever wondered “who the F am I anyways?”  I’ve never asked
Jonatahan if he’s Buddhist or if he practices meditation, but I do know
this: he tests every idea that he comes up with in the lab of his own
life, rejects what doesn’t work, keeps what does, then writes about it
in a way that makes me feel like I am up at 2AM having an amazing
conversation with an old friend. Love it.

9. Elephant Journal
If the Interdependence Project is the New
Yorky/crunchy/environmentalist/Kumbaya/neurotic love child of Martin
Luther King Jr, Allen Ginsberg and Woody Harrelson, then Elephant
Journal is our easy-breezy/Bouldery-y/athletic
intellectual/pine-scented/ski-pass toting/yoga-doing cousin.
Personally I’d love to see a shirtless Celebrity Buddhist Smackdown
between Ethan Nichtern and Waylon Lewis, but I should proabably keep my
sordid fantasies to myself. In any given day, Elephant Journal might
write about yoga practice, a consumer boycott, the coolest yoga pants
to buy, and the decline and resurrection of a personal meditation
practice. If I turn the computer off for two hours, when I turn it back
on I’m almost guaranteed there will be something fresh from Elephant
Journal.

10. Ann Coulter One of the key
teachings of Buddhism is to develop enough space in your own mind that
you can recognize, and choose how to deal with, the three poisions of
greed, anger and ignorance.  As root causes of suffering, we dedicate
our practice to shining a light on the poisions in ourselves and
others, in order to alleviate dissatisfaction.  I can think of no
better opportunity to practice compassion or deal with our own internal
reactions than being faced with a living, breathing example of the
three poisions run amok.  Ann Coulter is a shining example of what
happens when you (consciously or not) embrace the poisons and then
package and sell them back to other people to increase their
dissatisfaction without offering any hope or path to a more easeful way
of being.  This may be the best site site of all the best
sites for Buddhists, as it offers an opportunity to practice how we
deal with unskillful emotions in oursleves, and in others.  It’s easier
being Buddhist in the familar environments of  Elephant Journal,
Tricycle, or Buddhist Geeks –  but what happens when we are confronted
with button-pushing unskillful dogma?

I’ve deliberately
avoided listing any sites that are commercial re-packagings of the
Buddha’s teachings as instant enlightement, “quadrant thinking”, or new
agey self development.  (you know who you are – some of your ads even show up automatically at the bottom of this page).

What’s your favorite places to visit online? What sites have I missed? 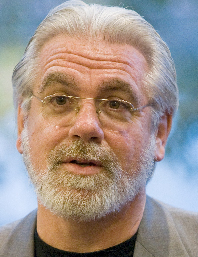 Podcast: "The Mindful Leader" with Michael Carroll Part 2
archives most recent
More from Beliefnet and our partners
previous posts