Superman has turned in his U.S. passport, preferring to be a citizen of the world.

“I intend to speak before the United Nations tomorrow and inform them that I am renouncing my U.S. citizenship,” the super-hero declares to the President’s National Security Advisor in the just released Action Comics 900 from DC Comics, which owns the Superman franchise.

“Great Caesar’s ghost!” writes reporter Dareh Gregorian in the New York Post. “He’s not giving up his citizenship because of health care reform or high taxes. He made the declaration after his protection of protestors in Iran becomes an international incident.”

The fictional Man of Steel tells America’s National Security Advisor, “Truth, justice and the American way – it’s not enough anymore. I’m tired of having my actions construed as instruments of U.S. policy. I’ve been thinking too small. I realize that now.”

So, has Superman turned his back on the red, white and blue?

No, explain DC Comics co-publishers Jim Lee and Dan Didio. Although he will be a world citizen taking a global outlook, the character is and always will be a red-blooded American at heart, they assured.

It should be remembered that he’s been an illegal alien all along.

“Superman is a visitor from a distant planet who has long embraced American values. As a character and an icon, he embodies the best of the American Way,” the co-publishers said in a written statement to the press.

But the reality is that in his origin in the funny books, he’s sent to Earth as a baby to escape the demise of his home planet, Krypton. He’s found by a kindly, childless Smallville couple that raises him as their own.

So, he wasn’t born in the United States — certainly has no birth certificate. The Kents never legally adopt him. So, he’s an undocumented alien.

Is his denouncing citizenship that never existed just a stunt to sell more comic books? After all, controversy sells. If that was the intent, on the Internet there are those who have taken the bait – criticizing the plot development. Not surprisingly, the result has been a surge in sales ever since the denunciations of his actions began. The boost certainly cannot be a disappointment to DC Comics executives. 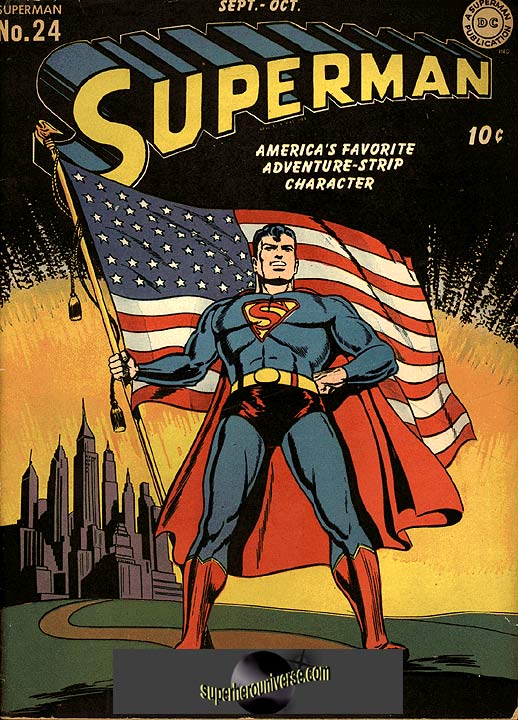 However, there is ample precedent. In the early 1990s, the comic book A-team, the “Justice League of America” became “Justice League International” so they could deal with more fairly with global threats.

In the 1970s, Steve Rogers briefly gave up his alter-ego as Captain America to protest U.S. government corruption. He has since returned to his identity as the star-spangled avenger to fight for the American dream, but not for the American government.

In the recent G.I. Joe movie, an American task force is turned into one that represents all countries – so that other nations can feel better about the movie … and buy more tickets.

In the story in the just-released Action Comics 900, Superman attends a non-violent protest rally to voice his support for those who oppose the Iranian regime.

Couldn’t he have just declared he was not acting on behalf of the U.S.? While “Superman” may be giving up his citizenship, Clark Kent won’t. He’ll still live here as a loyal citizen and mild-mannered reporter for the Metropolis Daily Planet.

Never mind that he has no legal status with U.S. Customs and Immigration.

Are children bad for your marriage?
archives most recent
More from Beliefnet and our partners
previous posts