Some Spring Breakers have more than partying on their hearts

Thousands of Christian kids are headed for the beach this Spring Break. 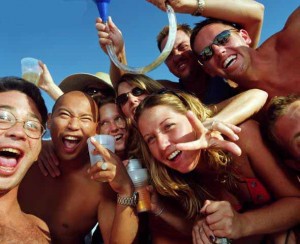 They’re modern fishers of men, writes Kris Axtman of the Christian Science Monitor. Some are part of the Southern Baptist Convention’s 2011 Beach Reach. Others — some 3,000 students from across the United States — are expected to participate this year in Campus Crusade for Christ’s annual Big Break outreach.  Intervarsity Fellowship has a big event planned for Kansas City — for students who couldn’t make it to the beach. Tim Lin explains why they’re hosting RealHOPE:

“A student from St. Louis University and a Washington University staff member were doing conversational evangelism,” he recalls. “One of the students they talked with was a Chinese Ph.D student who said that he had grown up a non-Christian.

“In his words, ‘My parents were disciples of Daoism…I want to be a disciple of Jesus.’

“Apparently, he had been studying Scripture with someone in Louisiana before coming to the University of Missouri at Kansas City for his Ph.D. After sensing that the student had no idea how to become a disciple of Jesus, they set a date for the next evening.”

At the end of that meeting, the St. Louis University student challenged the Ph.D to make a firm decision to follow Jesus with his whole life, and he agreed!”

Such one-on-one evangelism is the goal of the Beach Reach kids at South Padre Island, Texas, reported Axtman — who watched an attractive student in a mini-skirt strike up a conversation with a group of captivated Texas A&M boys. Artfully, she got them talking about God and eternity — and where they were going to end up.

Campus Crusade’s Big Break “has been going strong for decades now,” says Clay Fuqua, “changing the lives of students and in some cases entire families.”

He should know. His father became a Christian at a Big Break outreach 25 years ago. 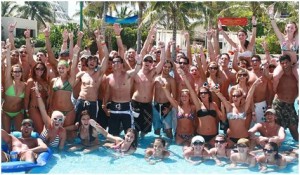 “My dad was 18 and having a wild time at the beach when he experienced the impact of Big Break.  He told me that he was following a few girls in bikinis while on his way to a liquor store, when a student with Big Break struck up a conversation with him about Christ.  Two days later, my dad accepted Christ,” remembers Clay.  “Big Break is such a great opportunity for students to see how God works in people’s lives.  Something like this can and does change generations.

“Our family is proof of that.”