Sometimes, as a writing exercise, I just decide to start writing about an idea and see where it leads. That’s what today’s post is.

My tendency is to over-analyze and over-explain when someone asks me complicated questions, especially theological ones. So I thought it would be a fun exercise to just sit down, think of random questions, and type out the simplest answers that came to mind. Because in most cases, simple answers make me happier than convoluted ones.

As these sorts of self-administered Q&As tend to go, the whole thing eventually turned weird.  But at that point I was committed to it. Anyway, this has been sitting in my blog queue for a few days. I guess it’s time to post it.

Can you prove to me that God exists?
No.

Can you prove to me that God doesn’t exist?
No.

That’s it?
Oh, I forgot. Ephesians 2:10 says you were created to do good works, and God has prepared in advance for you to do them. So I suppose that’s his plan for you.

But doesn’t God have, like, a whole script for me about what career I should have and where I should go to college and who I should marry?
I doubt it. If he wanted you to do something so particular, why would he make figuring it out such an ambiguous process?

Are you worried that President Obama is a Muslim?
Where did THAT question come from? I’ve learned to stay away from politics.

But I’m curious. Every Christian I know seems concerned about it. Aren’t you?
No. I tend to believe him when he says “I am a Christian, and I am a devout Christian.”

But couldn’t he be lying as part of a Marxist/Islamic conspiracy?
I guess. But as a Christian, are you in the habit of not believing people’s personal testimonies about God? Like, how would you feel if you came up to me and said, “I am a Christian,” and I insinuated that you were lying? That’s not very charitable. Does grace only apply to you and not others? Obama is your neighbor, right? I suggest you follow God’s plan for your life and love him as you love yourself. Do unto others and stuff. Also, don’t forget the part about loving God with your mind.

Wait, are you a liberal?
I have no idea.

Are you a conservative?
I do like to conserve things.

Fine. I just finished posting the 10 Commandments on the wall of my living room.
The answer is no. It does not bother me that government buildings can’t post the 10 Commandments. It sort of bothers me that you now have them posted in your living room, though. But now that I think about it, my grandmother used to have a brass plaque of them posted in her house, and she’s awesome. So that’s OK.

What Bible translation should I use?
Whichever one you find clearest and most informative to read.

But aren’t some of them, like, Satanic or something?
Only the New International Version (NIV). And then only if you’re a crazy person.

Should I get a tattoo?
Sure, if you want one and if you think it’ll still look awesome when you’re 73.

But the Bible outlaws tattoos in Leviticus 19:28.
Correct. Also, two verses ahead of the no-tattoos verse, it says not to eat meat with the blood still in it. And Leviticus 19:27 says not to cut the hair on the sides of your head. If you’re going to worry about a tattoo, you should also follow a kosher diet and stop going to Supercuts.

Do you have a tattoo?
Yes. I have Leviticus 19:28 tattooed across my back as a reminder to others.

Your turn. Ask and answer your own question, as simply as possible. 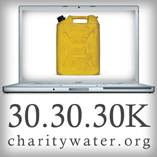 30 Bloggers, 30 Days, $30,000
archives most recent
More from Beliefnet and our partners
previous posts