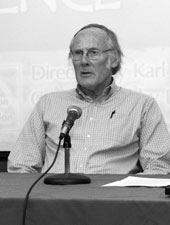 Clark Pinnock was one of the first real theologians I ever read, and definitely one of the most controversial. I hadn’t thought of him in awhile, but was saddened to hear of his unexpected passing on Sunday, August 15, from a heart attack. Back in March, he revealed he had also been suffering from Alzheimer’s disease.

Pinnock was just 73, and he died too early. Here’s an obituary from Christianity Today.

In my last semesters of college, I took a couple of religion classes as electives. Based on several long faith discussions with my professor — a Catholic priest and the director of the Catholic Student Center at my university (he’s still a good friend today, btw) — he recommended that I read a couple of Pinnock’s books. So I did. The first was Unbounded Love: Good News Theology for the 21st Century, which Pinnock wrote with Robert Brow.

I then went on to read The Openness of God: A Biblical Challenge to the Understanding of God, to which Pinnock contributed and edited, along with Pinnock’s own A Wideness in God’s Mercy: The Finality of Jesus Christ in a World of Religions.

I’m revealing my theological nerdage here, but reading that series of books — and I went through them all in a row, over four or five weeks — was one of my best reading experiences ever. I loved Pinnock. His theology was challenging and I didn’t always agree with it, but I loved how passionate he was about the Bible. His passion fed and deepened my own, as did his openness to ask hard questions and consider different perspectives.

Pinnock will primarily be remembered for his work as one of the primary advocates of “open theism,” in which he believed that God limited his own knowledge as he dealt with humanity. In other words, God wasn’t all-knowing, by choice. He kept himself from knowing the future. So, in Pinnock’s view, God could be surprised, God could regret, and God could change his mind. In fact, he’s depicted doing these things in several Old Testament stories. In that vein, Pinnock based this highly controversial viewpoint on Scripture — especially the passages that people read and didn’t understand because they didn’t match up to our preconceived ideas of God’s sovereignty and omniscience.

Calvinists hated Pinnock, as you might expect. They thought he was a heretic and they thought open theism was a dangerous idea that undermined the character of God. If you Google “Clark Pinnock” right now I guarantee one of the top 10 links will be something denouncing him and talking about his descent into theological error. Pinnock was the source of a huge amount of controversy and tension within the Evangelical Theological Society, which tried (and failed, by a narrow vote) to kick him out in 2002.

But this wasn’t just some rogue theologian making stuff up about God to fit some personal, selfish agenda. Pinnock was committed to the Bible. One of his first books, back in 1967, was called In Defense of Biblical Infallibility. He came from a fundamentalist background. His theology was fluid, always expanding, and was not axe-grinding but an attempt to make sense of the Bible — especially the parts that seemed to contradict the traditional, orthodox idea of omniscience.

That’s what I appreciated most about Pinnock: he didn’t get paralyzed by the questions, but instead let his questions propel him to new ideas and, yes, to change. He began his theological career as a Calvinist and a strict believer in biblical innerrancy. At New Orleans Baptist Theological Seminary he became a mentor of Paige Patterson, who led the fundamentalist takeover of the Southern Baptist Convention back in the 1980s. But it wasn’t long until Pinnock’s theology pushed him away from conservatism and into the theological left, where at Trinity Evangelical Divinity School he became a mentor to Jim Wallis.

Yes, that Jim Wallis. Quick: name someone else who mentored both Paige Patterson and Jim Wallis.

I can’t, and that’s significant. Pinnock swung from fundamentalism in the 1960s to liberal, social theology in the 1970s and ended up somewhere in the middle — anathema to both sides.

The Christianity Today obituary offered this quote from him: “Not only am I often not listened to, I am also made to feel stranded
theologically: being too much of a free thinker to be accepted by the
evangelical establishment and too much of a conservative to be accepted
by the liberal mainline.”

He was also not afraid to admit that he’d been wrong, and his views had changed. That’s a mature perspective, and it’s one I appreciate.

Pinnock influenced me because his work addressed many of the questions I was having about God. He took seriously passages of Scripture which seemed to contradict the traditional ideas I was struggling with, and attempted to explain them — even if his explanations took him to a new and uncomfortable place.

Here’s what I learned from Pinnock:

3) mentioning these alternative views really made some Christians angry, and even if you did it passionately and faithfully, those Christians would try to kick you out of their groups

I’m not a Calvinist, nor am I an open theist. But I’m a Clark Pinnock fan. And some Christians will probably think I’m suspect just because I’m admitting my admiration for him. It’s our own stupid version of guilt by association.

The complete text of his book, Unbounded Love, is available here online.

And here’s an informative, detailed bio of him by Michael L. Westmoreland-White.