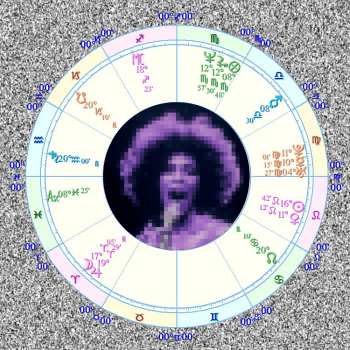 Your astrological birth chart is a basic recipe for who you are as a person. It’s the transits to that birth chart from where the planets are now that make things happen in your life. And one of the freakiest things about astrology is that those transits keep on telling a story even long after you are dead. Take for instance the case of Whitney Houston who is about to begin her residency in Las Vegas via hologram despite being quite dead.

(And by the way, when we were talking about this? I honestly don’t know whether to be creeped out by the thought of zombie performers, or thrilled at what technology can do. Make of it what you will. I’m just reporting the astrology.)

Whitney was born August 9th 1963, at 8:55 PM, in Newark New Jersey. She died on February 11th 2012. However, her estate has developed a holographic simulation of her. It (she?) had some reasonable success touring the UK in 2020. She (it?) will be beginning an extended stay of residence at Harrah’s Las Vegas starting on October 28th of this year. All the transits indicate that it is going to be a roaring success for her (it?). Or rather: her estate. Well… someone is going to make a lot of money off of this.

If Whitney were alive, she would be having an excellent time on October 28th 2021 at 8 pm, which is when the hologram premieres. Her Second House, which rules money in general, is ruled by Mars at 8 degrees Libra, and it will be getting a close trine at that time from transiting Saturn at 7 degrees Aquarius. Money made specifically off of work/career is ruled by the 11th House , which (in her case) is ruled by Saturn. Jupiter will be within 2 degrees of the conjunction to where Saturn was when Whitney was born.

Just to top things off? Her Midheaven, which is the general indicator of career and/or life direction, is at 18 degrees Sagittarius. That point is getting a square from transiting Neptune (as it was during the UK tour. A Neptune square tends to bring strange circumstances and, well… this whole thing is really strange isn’t it?

Or: is it? The hologram will be performing with live backup singers and dancers. Maybe that sounds pretty strange, but in a certain sense that’s nothing different from you sitting at home listening to a Whitney Houston album and playing along with a sock puppet. Except of course you wouldn’t be paying $40 a ticket.

In conclusion: you think astrology is weird? Take a look at life!

Mr. Fowler's Guide To Venus In Virgo
archives most recent
More from Beliefnet and our partners
previous posts