Astrology: Mars (Out Of Bounds) Attacks! 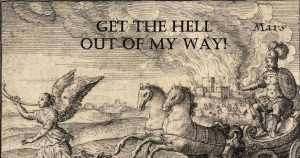 I recently wrote a blog entry about the current condition Mars finds itself in, and I now realize that I skipped over something I should have warned you more clearly about: not only is Mars in a particularly precarious position by degree, it’s also out of bounds.

A planet being “out of bounds” is one of those astrological concepts that I haven’t talked a lot about here. In part I think that’s because it’s a relatively difficult concept for me to describe, even though it’s quite easy once you’ve got it in your head (honestly, you should see me waving my hands around trying to describe how the Moon’s Nodes work some days!). But I’m going to give it a shot.

From our perspective here on Earth, the Sun, Moon, and planets appear to go around the sky in a relatively narrow band. We call that the Zodiac, and astronomers call it the plane of the ecliptic. Imagine the Earth’s equator stretches out in the Zodiac/plane of the ecliptic. As the planets move through the Signs, they also move up and down across that equator, appearing to drift North or South of the middle of that line. If we say that “Mars is at 28 degrees Capricorn,” that only tells us part of the story. That’s where Mars is at in terms of celestial longitude, but the planets also move up and down across the ecliptic while traveling through the Zodiac.

During the course of its apparent travel around the sky, the Sun moves back and forth between about 23 and a half degrees North of the Celestial Equator (which is the summer solstice in the Northern Hemisphere ) and about 23 and a half degrees South, (which is the winter solstice in the northern hemisphere). Any planet going further North or South of that is considered to be “out of bounds.” As I write this, Mars is at 26 S 17 declination… far to the South in the Plane of the Ecliptic. Therefore, Mars is out of bounds.

Planets that are out of bounds can produce erratic and unusual results. Mercury out of bounds in the birth chart, for example, can make a person an unusual and powerful communicator, or can make for erratic thinking, or both.

Mars is now retrograde, but goes direct on Monday. At that time it will still be in Capricorn, which is where Mars is exalted. Keep in mind that a planet that is stationary and going direct is particularly powerful. Mars out of bounds can make the results of Mars-based actions particularly wild and unpredictable… and Mars going to be out of bounds until September 24th. This should all serve to caution us when it comes to matters of aggression, ambition, and sex.

Now, if you haven’t already, go back and read this blog entry again about what Mars will be doing in the next few weeks… and play nice with each other.

These Adorable Kittens Want To Talk To You About Astrology!
archives most recent
More from Beliefnet and our partners
previous posts