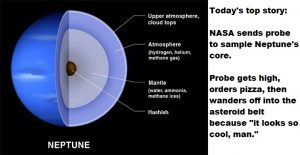 Astrologers fall all over themselves trying to explain how Neptune works in a birth chart and in transits. Liz Greene wrote a brilliant, phone-book-sized volume about it that still came out largely as a stack of metaphors.

I’ve tried to boil down Neptune into simple, easy to understand terms today. And in the tradition of Neptune itself, today’s entry is also a secret message to all the Pisces out there. Pisces loves little notes clandestinely passed to it in the back of the class.

Here are some drugs to avoid today, and I’ve made it all as metaphor-free as Neptune itself will allow:

Being drunk is a loud party with no ride home. Marijuana is flipping through the channels looking for news but only finding cartoons. Ecstasy is dancing to the beat of a song that’s ruining your hearing. Mushrooms are like realizing that everything is alive, and everything is moving, and your house is running away. Heroin is a world where nothing goes wrong, ever, even when the roof cave in on you. Cocaine is all the speed of the Autobahn, with a thousand times more and deeper potholes. Caffeine is a commissioned salesman on a roll, and who cares if the store is closed? LSD is seeing what God sees, only to wonder later if God wouldn’t rather have cable instead. Nicotine is five seconds of clarity and ten seconds of death. Ketamine is like being in a giant hamster ball at the rodeo. Salvia is like sitting in a hot bath with a head full of helium.

Of course, “drugs” aren’t the only thing we drug ourselves with…

Religion is half an answer in an oversized hat. Spirituality is a muscular ditch-digger without a shovel. Politics is a band of attacking monkeys with written justification. Society is a beauty contest where you’re the only contestant and everyone else is a judge. Materialism is a starving man filling his face with styrofoam packing peanuts. Community is an angry mob with torches that accepts you… today. Romance is a beautiful child who screams for cookies every ten minutes. Sex is an itch you’d gladly tear your skin off for one day, and just a rash the next. Patriotism is a loyalty oath directed towards the empty drum you hide behind. The Internet is a room full of parrots all offering advice, all at once, all caked in each other’s crap. Astrology is a weatherman who can’t make it rain or stop raining. Love —

Love is the reason we’re all here, and is not the dominion of any one planet.

So: avoid all Neptunian drugs today, and everything will be as wonderful as it is in a public service announcement… for 15 to 60 seconds at least…

Ask An Astrologer: Will My Marriage Last? (Part Two)
archives most recent
More from Beliefnet and our partners
previous posts