Don’t panic… if it’s Western Astrology you want, I’ll be back to regular business next time. But if you’ve ever heard of Vedic Astrology (the kind of astrology traditionally practiced in India… and which I’ve written about before HERE), you’ve likely heard two things:

Statement One is certainly true, and the more I learn it, the more amazing it becomes. As for Statement Two? Well… maybe. I admit it takes a lot more memorization than Western Astrology, and is a lot harder to bluff your way through with keywords and such. But in fact there are some things about Vedic Astrology that can actually be simpler than in Western Astrology: namely, aspects.

Here’s Justin Bieber’s South Indian chart. (I’ve written about his chart before, HERE and HERE). In this kind of chart, Pisces is always in the top left hand corner, and the Signs go around clockwise. 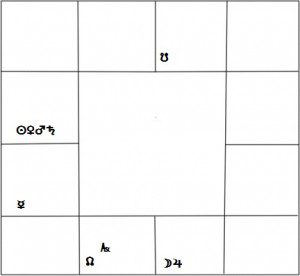 Remember that the Vedic Zodiac is about 23 degrees off from the Western Zodiac, so even though Bieber has Sun in Pisces (in his Western Chart) it’s actually in Aquarius in the Vedic chart. Don’t sweat that for now.

Signs and Houses are basically the same thing. In the Vedic system, Justin Bieber’s Ascendant is at 5 degrees Scorpio, so the entire Sign of Scorpio is his First House (as is the case with Whole Sign Houses). The entire Sign of Sagittarius is his Second House, all of Capricorn is his Third House, and so on. Starting with the Ascendant in Scorpio, which is in the vicinity of the bottom left, we count around clockwise. So, that’s Mercury in his Third House. 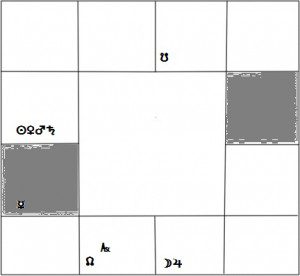 So, we find the Ascendant in the bottom-left area — Scorpio. We count around clockwise to Mercury and see it is in the Third House, which in his case is Capricorn. So we say that his Mercury aspects his Third House and the opposite House — The Ninth.

Now, let’s move on to the next House — the Fourth, which looks pretty packed. 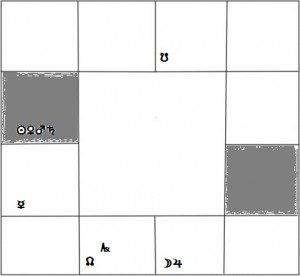 The Fourth House, as you may know, rules the mother. Gosh I wonder if Justin’s Mom has been an influence? Anyway, there in the Fourth are his Sun, Venus, Mars, and Saturn. Since a planet aspects the House it is in, the opposite House, and any planets in those Houses, Justin has a Sun, Venus, Mars, Saturn conjunction. Yes, even though his Mars and Venus are 26 degrees apart, it’s still a conjunction, because they’re in the same House.

Now, let’s look at his Moon and Jupiter. 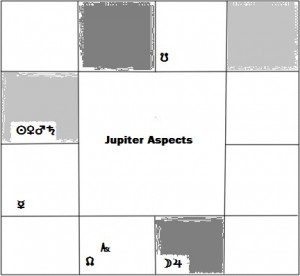 Since we start at the Ascendant and count around clockwise, his Moon and Jupiter are in his Twelfth House. And even though they are 20 degrees apart, they are conjunct. So, he has a Moon-Jupiter conjunction in the 12th House that aspects the Twelfth House and the Sixth House.

And hey, what about his Nodes, in the First and Seventh Houses? In Vedic astrology, the Nodes are said to “cast no rays,” meaning they don’t aspect anything other than the House the are in. Easy! Don’t worry, the Nodes are still important in Vedic Astrology… more important than in Western Astrology, to be exact.

Now if that’s all you learned, you’ve already got a good handle on how aspects work in Vedic astrology.

Mars, Jupiter, and Saturn also have special partial-strength aspects of their own that they cast above and beyond the ones mentioned above. Mars casts a 3/4 strength aspect four Signs and eight Signs from its natal placement: 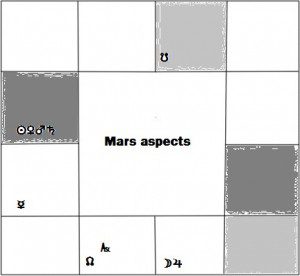 …so Mars also casts a 3/4 aspect on his Seventh House and his South Node. Gosh, I wonder if there’s any relationship karma this guy’s gonna have to deal with?

Jupiter casts a 1/2 aspect on the Houses that are five and nine Signs/Houses from its natal placement:

Now we see how Jupiter takes on extra significance in The Beeb’s chart. With it aspecting all that stuff in the Fourth, luck — or entertainment — must be a big factor in his life somehow. 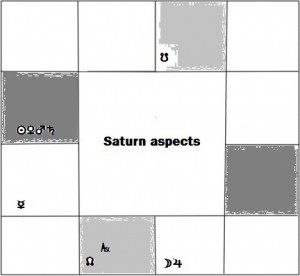 Okay, there you have it — aspects! See how relatively painless that was? If not, give it time. Or contact me for a reading. Or just hang tight until next time and I’ll get back to your regularly-scheduled Western Astrology.