LAST TIME: I explained the difference between Placidus Houses (the system most Western Astrologers use) and Whole Sign Houses (which a smaller but growing number of Western Astrologers use). This time, I’m going to show you the difference between how they work with a specific example, that of George Lucas (born May 14 1944, 5:40 AM, Modesto California), who is best-known as the creator of the Star Wars film franchise. 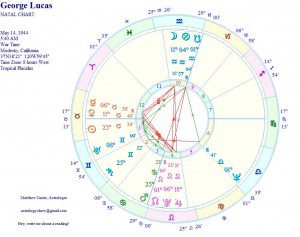 Career Guidance: Fifth House (creativity) ruled by Sun in the First: if this guy wants to make money in creative endeavors, he should consider being an actor or dancer. Actually, since his Fifth House is intercepted, maybe he shouldn’t be in a creative line of work at all. With Mercury and Venus in the Twelfth House, he should probably consider a career in counseling instead. Also: the Sixth House (work habits) has a nearly unaspected Neptune in it, so George probably doesn’t have the organizational skills required to run a large project like writing and directing a film.

Finances: Hoo boy! Saturn in the Second House (money) ruled by Mercury in the Twelfth? This guy is going to always be struggling for a buck. Ruler of the Second in the Twelfth can also indicate a lot of time on Welfare. With his Moon and Nodes squaring that Mercury, it’s even more unlikely this guy is gonna make a buck.

Okay, that was obviously me being kind of a jerk to make my point. But none of those interpretations are made-up or non-standard. Clearly there’s more to interpreting a chart than just running down the checklist of factors. And if you are a big fan of Placidus Houses… bear with me. I have a surprise for you later on.

Before I move on to the Whole Sign take on this chart, a word about “interceptions.” The Placidus House system (and some others) can produce a situation where a pair of Signs are intercepted… in other words, in the case of George Lucas, Virgo and Pisces do not rule the cusp of any House. In theory, this means that George has “blockages” expressing the qualities of the Signs. Furthermore, the closer to the poles one is born, the greater the odds of an interception. Do people born in Norway have an inherently harder time expressing their inner qualities than people born in Ecuador? Somehow I don’t think so. 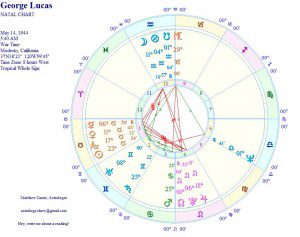 Career Guidance: With Uranus-ruled Aquarius as the 10th House, he may well introduce surprising new techniques to his line of work. With Mercury ruling the Fifth House (creativity) conjunct a strong Venus in Taurus, profiting from a creative line of work is indicated. Mars in the Third House often indicates a love of and/or understanding of machines and technology… so perhaps a career path that combines artistry with technology would be a good idea. Hey, how about making movies that rely heavily on special effects?

Finances: With both the modern (Uranus) and traditional (Saturn) rulers of the 10th House (Career) in the Second House, we can expect George to make money at whatever he decides to do for a living. The Ninth House (contracts and legal agreements) is ruled by Saturn, and Saturn is in the Second House. George might find a way to make money off of innovative financial arrangements (like pioneering the art of negotiating for merchandising rights).

Okay, that was obviously biased too… but hopefully you can see through this example that Whole Sign Houses can do a better job of nailing the observable details than the more psychological approach that Placidus often takes.

Go back and re-read that Placidus-based interpretation I made, but think of it as how George Lucas sees himself. Think of it as how he feels about his life as opposed to what it looks like to an outside observer.

Now consider this: George Lucas is the creator of the most successful film series of all time. He revolutionized film-making, special effects technology, and made Science Fiction mainstream and respectable. His creations have become as much a part of the public consciousness as any other single artist, ever. And yet… every chance he has gotten, he has re-edited and tinkered with his works, added new scenes and new effects in a largely unsuccessful attempt to “improve” them. And the last three Star Wars movies, over which he had unprecedented creative control and a virtually unlimited budget, turned into bloated and widely unloved exercises in merchandising and special effects over plot and characterization… and they still made a ton of money.

So yes: maybe the “psychological” approach has meaning after all. But for me personally? When I’m doing a reading I can look at psychology all you want… but I’d much rather see and predict the observable and let YOU figure out how you feel about it. But that’s just me.

(PS: If you like to mix Star Wars and Astrology, read this…)

(PPS: My prediction as to whether or not this month’s release of “The Force Awakens” will be a success? Are you kidding me? This thing is going to make giant dump trucks of money on its opening week. What, you needed an astrologer to tell you that?)