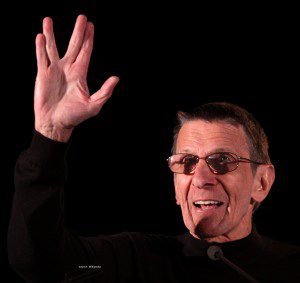 Earth. Third planet from its solar primary. A planet whose native dominant intelligent species has, in a remarkably short period of time, developed the science and technology to change the shape of their world and their destinies, for better or worse. Without one unifying theological or philosophical worldview, Earth’s inhabitants end up relying (without even consciously knowing it) on something else entirely as a means to help them be more like the “better angels of their nature.”

Leonard Nimoy was An Artist. I say this not because he was an actor or a singer or a writer or a photographer – although he was all those things. I say this because his creative talents and impulses contributed to something greater than himself… something that over the years has inspired millions to pursue a life involving science and technology that has made everyone’s lives better somehow, and inspired many more to create Art, and inspired millions to respect and even value the differences between us.

That’s really how Life should work, isn’t it?

Leonard Nimoy’s character on Star Trek, Mr. Spock, was an alien. To be more accurate, he was the product of the union between an alien race and a human being. His father people were Vulcans. Vulcans were a species with a long history of violence and aggression towards each other who eventually conquered their impulse to self-destruct through the strict application of logic and self-control. His mother was a Human. I leave it to your own judgment as to where her particular species is at with controlling their self-destructive impulses.

I too was the product of two very different worlds. Both human, but otherwise quite different. Spock grew up in a world where, because of his mixed heritage, he was an outcast – despite such prejudice being highly illogical. I too grew up in a world where I was half one thing and a half another, and never quite belonged to either. It was a world composed largely of silence and unsupervised contemplation, punctuated only very occasionally by drunken rage or violence or the sound of something breaking at 2 AM.

Nonetheless, there was a voice of hope and reason and the sanity in my world. Sometimes we inherit our moral and philosophical compass, and sometimes we have to find it for ourselves. In my case I found it on the television screen. It was called Star Trek.

Sure, Star Trek was all about science and technology and fantasy and planets with cheap styrofoam boulders and such, at least on the surface. But behind it all, Star Trek had the soul of a preacher, and it preached in that way that only science-fiction and fantasy really can. Like: a story where two members of a species are locked in a constant struggle with each other. One of those beings is black on the left side and white on the other. The other one is white on the left side and black on the right. No matter their differences, they can’t see past that one difference that is literally skin deep. Sounds kind of dopey, doesn’t it? Admittedly, it is — until that message sinks down and flips a switch in your inner seven-year-old and makes you realize that “oh my God they’re talking about racial bigotry!”

That’s what Art does best. It takes obvious artifice and somehow manages to acknowledge something more real than anything The CBS Evening News would dare touch, especially in the middle of the 1960s.

Maybe it’s my Fifth House Neptune, but that sort of thing speaks to me, it was certainly more Real to me as a seven-year-old than the seemingly random bits and pieces of my Real Life were at the time.

Leonard Nimoy was an important part of that, and he was a part of making me who I am today.

If you want an astrological observation about Leonard Nimoy, here it is: he was born 26 March 1931, somewhere between 8 and 9 AM, in Boston. There is actually an asteroid named Mr. Spock. Yes, really. And in Leonard Nimoy’s birth chart, it was in his 12th House. Planets in a person’s 12th house can often represent deep and difficult psychological issues that need to be resolved.

In Nimoy’s case, he was the author of not one but two autobiographies: one called “I Am Not Spock,” in which he attempted to work out his issues with the role that both made him famous and yet acted as a sort of curse, and then years later he wrote “I Am Spock,” which found Mr. Nimoy in a much better headspace to gracefully accept the tremendous good he brought into the world by playing that role.

Sure, it’s easy to dismiss the influence of Star Trek as being childish or unrealistic or whatever… just as it’s easy to dismiss Astrology as childish or unrealistic or whatever. But I’ve personally experienced the power of both, and I have seem them both (in their own ways) do miracles… real-life miracles that really exist in the real world… and I’m a better person for both of those.

Dismiss the value of either of those if you like, but I wonder what Spock would say to that?

Godspeed Mr. Nimoy. You were a part of making a bigger, more meaningful world for millions, probably more than even you could have ever known. Thank you.

Astrology, Spirituality, And Clogged Toilets
archives most recent
More from Beliefnet and our partners
previous posts