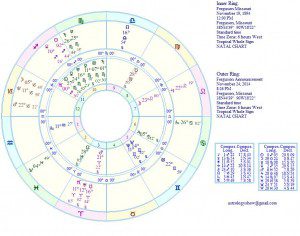 Astrologers sometimes struggle with a certain sense of fatalism. As much as we understand the role that Free Will plays in a person’s life, we know that we can never escape some of the conditions laid down by the birth chart and by transits to it. We know when to carry an umbrella, but we can’t stop the rain.

Monday was supposed to be a quiet day. The Moon in Capricorn only made one major aspect, a peaceful sextile to Neptune. When you see conditions like that, it’s easy to forget a detail like “the Moon is also applying to a conjunction with Pluto, quincunx natal Pluto, in Ferguson Missouri’s natal chart. Fate waits to be triggered into an eruption.”

So naturally, this was the day the Grand Jury in the Ferguson Missouri case of the shooting of Michael Brown decided to release their verdict. We had waited three and a half months for this, tick tock tick tock, slowly marching towards the outcome, whatever it may be.

One of the first toys I remember owning is the Fisher-Price Teaching Clock. It didn’t take me long to learn how to tell the time from it, but I was obsessed with the toy. You’d wind it up and it would play its tune and it would slowly wind down until it stopped.

The real reason I became obsessed with the toy is that my older sister, who was the keeper of all forbidden knowledge in my family, told me the words to the song it was playing. She found them for me in a book so I could read them, and sang them to me, in case the impression hadn’t sunk in deeply enough.

My grandfather’s clock was too large for the shelf,
So it stood ninety years on the floor;
It was taller by half than the old man himself,
Though it weighed not a pennyweight more.
It was bought on the morn of the day that he was born,
And was always his treasure and pride;
But it stopp’d short — never to go again —
When the old man died.

The clock played the chorus to this song. So I found myself obsessing over the toy and struggling against its very solid mid-60s construction to find a way to take it apart. Somehow I managed to cut a hole in the incredibly thick plastic covering it so I could stick my finger in and stop those hands (how I did this without injuring myself is beyond me – a steak knife was involved). I cut a hole at about the 1 o’clock position, over the picture of the grandmother with the child playing on her lap.

I could stop those hands as long as I stuck my finger in there, but I could never turn them back very far. No matter what, eventually it would start ticking again and wind down. If you wound it up again, eventually you got tired and would stop anyway.

In hindsight, this is an excellent way to raise a traditional, somewhat fatalistic astrologer. You can read the clock, but you can never stop it. You know that one day, the transits will come and collect their dues (tick, tock, tick, tock).

In hindsight, this as much as anything else was the Genesis of an Astrologer.

I have written about the astrology of Ferguson Missouri HERE. Have a look at it and come back for more details.

At the time the Grand Jury’s verdict was announced, the Moon was approaching the conjunction to transiting Pluto, which was exactly quincunx Pluto’s position in Ferguson’s birth chart. Transiting Mars was closely square Ferguson’s natal Mars, so there was an above-average chance for something going violently wrong. Transiting Saturn was within less than a degree of Ferguson’s natal Sun: authoritarian restrictions fall upon expression. And transiting Jupiter was trine Ferguson’s Mars and conjunct its Moon: an outburst of emotion.

The City Of Ferguson has sat patiently since November 19, 1894 awaiting this day. I’m sure there were celebrations that day in Ferguson — a picnic, a band, perhaps a parade to celebrate Incorporation Day. Hooray! Congratulations on your new city!

Regardless of all that, Ferguson was primed to feel rage on this day over a century later. As Mars set over Ferguson and the local Midheaven was square Pluto, the findings of the Grand Jury were announced.

I wish it had been different, but the gears of The Great Machine ground inexorably towards their conclusion.

God help us all.

I have no idea where that clock of mine got to. I probably hung onto it a lot longer than I should have. But sometimes, especially on days like this, I still hear that tune in my head, slowly winding down. (tick, tock, tick, tock)

Where in the great chain of existence do we look to find the cause of the death of Michael Brown, and the resulting onslaught? Individual responsibility for our actions is a good place to start, but at times like this even that most common sense of responses seems inadequate. All I know is that we need to keep trying to learn from our mistakes, to try to be better and saner humans, and to generally stop being such idiots.

The harvest one reaps from this philosophy is slim, but at least the work is steady.

Like it or not, we’ll all tend to treat today’s news from Ferguson like a Rorschach test for what we think about American Justice. I include myself in this: a few blocks from where I sit writing this now, there is still a memorial to Eric Garner, whom I saw killed by a cop, but there are still no answers and still no charges.

CLICK HERE to join the Oh My Stars Facebook Fan Page, and get exclusive content, an additional discount on a reading, more material on blog entries, AND ANOTHER free e-book

Saturn: Leap From The Pod Or Die
archives most recent
More from Beliefnet and our partners
previous posts