Neptune And The Food Babe: A Venti Latte Full Of Delusion 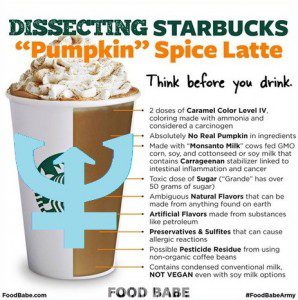 (Dear Reader: this blog entry was written as a shamanic channeling of the nature of Neptune, which rules altered states of consciousness. I began writing this article with a full tank of caffeine, and every time throughout the article when you see

…that means I have consumed another full cup of coffee.)

I’m wise to your tricks, Neptune. I see you up there, hovering around in the low degrees of Pisces, the Sign you rule. You’re so slow and so quiet that sometimes it’s easy to forget you’re there. It’s especially easy now, since you aren’t involved in any major outer planet aspects like the Saturn-Uranus quincunx or the Uranus-Pluto square. Your next major outer planet transit is a square from Saturn, and that doesn’t kick in until the end of the year, so you’re easy to forget. But you’re still out there working your magic and weaving your illusions and occasionally feeding into people’s delusions. Neptune rules a lot of things, like fuzzy thinking, fears of contamination, and celebrity. Case in point: noted “food blogger” Vani Hari a.k.a. “The Food Babe.”

Hari (Born March 22, 1980, time unknown, Charlotte North Carolina) is, as you might expect from an Aries with moon in Gemini, a passionate communicator. And I’m certainly in favor of information, and I don’t doubt that a lot of the food that modern living provides us with is frankly terrible. But at the same time, The Food Babe has made a cottage industry out of spreading misinformation, and has apparently made a decent buck at it.

Case in point: The “deadly” Starbucks pumpkin spice latte. The Food Babe is responsible for disseminating a tall and delicious cup of disinformation about this product.

If you spent much time on Facebook, you’ve noticed how real information and research can be easily replaced by a catchy infographic. I’ve fallen into that trap to at times because, let’s be honest, infographics are pretty cool, as humans we sometimes fall short when it comes to fact checking if we find something flashy that we agree with. But like a lame corporate PowerPoint presentation, they can be long on impact and short on actual usefulness or factual basis. We love these things though, and we all fall for them at times. Remember that picture of Obama taking everyone’s guns and putting them in the FEMA concentration camp (Or was it Mitt Romney squeezing the blood out of a puppy for cash? I forget) that you just loved a couple of years ago? Have you noticed that none of that stuff never really happened? And although Neptune doesn’t really rule “wealth,” you can make a decent buck feeding into someone’s preconceptions if they put their mind to it. Which brings us to The Food Babe and her fear of the Starbucks Pumpkin Latte.

Let me cut to the chase about the infographic pictured above

-Caramel Color IV, a carcinogen? Not that anyone reputable seems to have noticed. Also: “made with ammonia”? Ooh, that’s a scary sounding chemical. Never mind that just one of your kidneys alone produces far more ammonia per day than you’ll ever find in a latte.

-No real pumpkin in the ingredients? Seriously: have you ever examined the contents of a pumpkin? How are you supposed to drink that stringy goo anyway?

-Do GMOs cause cancer and inflammation? Well, darned if I’m going to brawl over GMOs here (that’s what Facebook is for!), but so far the scientific consensus seems to be “no” and “yes if you’re prone to that sort of thing, except when they actually make it better.”

There’s a bunch of other stuff wrong with this thing, but just take my word for it.

The Food Babe has been warning us about the hazards in some foods for years now, but it’s only in the last couple of years – since Neptune has been conjunction Mercury – that her research has gotten particularly sloppy. She went after a chemical called azodicarbonamide, now better known as “the yoga mat material,” that is used in a lot of bread products. It’s generally considered safe and is only ever used in small amounts, but Subway have voluntarily removed it based on the probably-unnecessary panic Vani Hari caused over it.

Then she pressured America’s two biggest breweries to released their complete ingredients of their beers, despite the fact that these are generally considered “trade secrets.” And – surprise! – It turns out there was nothing scary and your beer. But hey, knowledge is power and so is publicity, right?

But then there is her ridiculousness about microwave ovens. She claims that microwaves destroy nutrients, whereas in fact there are only tiny differences between the nutritional content of food microwaved and food cooked conventionally, and microwaving can actually help your food retain more nutrients than conventional cooking. Oh, she also likes to point out that microwave ovens were used by German soldiers in World War II. This is the equivalent to the argument that “if Hitler was a vegetarian, then being a vegetarian is wrong” So there! THERE!

And no, microwaves aren’t really “radiation,” at least in the scary radioactive sense. Look it up!

The Internet has made it faster and easier to spread disinformation than any other time in human history. Like, remember a while ago when everyone was in a panic about cyanide in their apple juice? Now it is true that apples produce cyanide naturally. But do you know how much cyanide? Here’s how you kill someone with the cyanide in apples:

2) place the 20 pounds of apple seeds in a pillowcase and tie it tightly shut.

3) repeatedly smash someone in the head with the pillowcase until they are dead.

4) garnish the shattered cranium with a sprig of organic mint… which contains menthol. Menthol can be lethal to humans in doses as small as 2 g.

THAT’S how much cyanide there is in apple juice.

Again: I appreciate the work that some do to watch out for the potential problems in our foods. But please, Vani… heed your astrologer’s warning and spend the next couple of years doing extra research before you start spreading opinions about how deadly something may be. Neptune is going to be on your Mercury for a long time, and there could be bigger embarrassments coming for you yet. YOU HAVE TO BE CAREFUL MAKING PUBLIC PRONOUNCEMENTS UNDER THE INFLUENCE OF NEPTUNE.