I Watched Them Kill Eric Garner 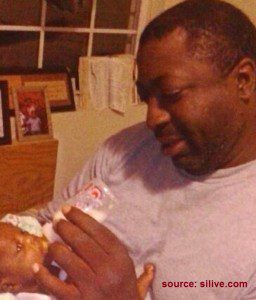 First of all, to my regular readers: there will be precious little astrology in this blog entry. We will return to our regularly scheduled programming next time.

To everyone else: welcome. My name is Matthew. I am a writer and an astrological counselor. It is my job to (among other things) help people understand what has happened in their lives, what will happen, and what they can do about it. Often when we are discussing such things, the subject of “karma” comes up. Like many of you, regardless of your personal beliefs, I have a certain sense that “karma” exists — and yet it’s a remarkably slippery concept to delineate in useful detail.

So, what is “karma,” exactly? The short answer: karma is a metaphysical system by which, ultimately, score is kept on our individual actions and how we act towards others.The longer answer: karma is one of those concepts like “reincarnation” or “God” or “divine will” that I believe in but have a hard time describing. I believe such things are real, and yet in some way they are so large that when I try to describe them or categorize them, I simply can’t.

Karma is one of those things I’ve been pondering a lot since I stood there and watched the cops kill Eric Garner last Thursday. It can be used to explain a lot of things… but how much actual meaning does it provide?

Karma is (by one definition) the total bonus points and penalties we have accumulated through both past lives and this current one. You could meet and fall in love with and have a relationship with and then break up with pretty much anyone… but the specifics as to the who and why of it is usually where people invoke karma.

The Universe operates according to certain laws, some of which we understand well and some of which we don’t. There are scientific laws, which are testable and well-established… and yet that doesn’t cover everything either. We have had plenty of time to study gravity, and yet apparently it only really works if we invoke “dark matter,” which is an undiscovered invisible something or other that makes up around 90% of the Universe. Ridiculous as that might sound to some, that is the consensus of current scientific thinking.

There are also human laws, which govern how we behave towards each other. These deal with things like which property you can take and which property you can’t, or where you can build your fence, or whether or not it’s okay to drive at a certain speed. Despite being clearly laid out, individual circumstances often require a trial and/or a judge.

Somewhere above (or perhaps beside or below) these laws is “the law of karma.” It is something that I believe most of us instinctively understand, and yet very few of us grasp clearly.

Karma sometimes seems like an attempt to codify something that otherwise would just be considered a wild card. If the bad guy gets away with a dirty deed, we say “the karma will catch up with him later.” We do nice things for others in the hopes that it will generate “good karma” for us, and act like a Get Out Of Jail Free card for something else later.

When something terrible like the death of Eric Garner happens, how much does invoking karma really help? I don’t know. All I can tell you for sure is: I was there. I saw it happen.

Eric Garner was well-known and well-liked in the neighborhood that I have just moved into. I had never met him, and didn’t know him, but I soon learned from others that everyone called him “Big Eric,” and for good reason. He was huge: six foot three and around 400 pounds. But by all accounts he was a pleasant and gentle person. Big Eric was not the type to use his strength unwisely.

When people see terrible and unexpected things, they’ll often say that it was like “something from a movie.” Watching Eric Garner die wasn’t like that for me. It was more like kabuki. The movements were strangely ritualized: calm, almost rehearsed. I can almost hear a commentary in my head, like a translator explaining the moves and the characters and the subtleties of Japanese culture during a kabuki performance to an uninitiated Westerner.

-Here is Eric, the man from the corner store. He came out to break up a fight, but the men who were fighting left as the police arrived. Eric has done what most would consider to be “the right thing.”

-Note that Eric is a black man. This will affect how many in Eric’s time perceive him.

-The police arrive. They are well armed and white. They know Eric. He has been charged before with the sale of individual un-taxed cigarettes to the people of his neighborhood. This is a common practice in Eric’s time and place.

-Now Eric has become upset. He is tired of being arrested.

-The men the police originally came for are long gone, so the police decide to arrest Eric. Notice how they encircle him. Eric becomes upset at this, waving his hands — not menacingly, but in frustration.

-Four policemen bring Eric down. One of the police officers — a plainclothesman who is dressed like a common citizen — wraps his arm around Eric’s neck. Eric is a large man and it takes four policemen to take him down.

-Although the policemen of this time have been instructed to not use the choke hold, it still happens. These policemen seem unaware that Eric is asthmatic.

-Eric protests that he cannot breathe. After a short time with the plainclothes officer pushing Eric’s face into the sidewalk, Eric’s protests stop. He twitches a little and then moves no more.

-The police officers do not render medical assistance. They try to shoo away the bystanders who are recording all this.

-The police stand around Eric’s motionless body as they wait for the ambulance. Eric does not move When the EMT crew arrives, none of them give Eric CPR. They show Eric approximately the same amount of medical care and attention that porters would show the luggage they were picking up for a trip to the airport.

-The ambulance takes Eric away.

This is what I saw, and this is what still plays in my head. It is Killing Kabuki.

So, karmically, and as an astrologer… what can I say about all this? I don’t have Eric Garner’s birth chart. But knowing my own birth chart, and knowing all the transits to my Mercury that day, I’m going to hazard a guess that as a professional communicator, it is my “karma” to communicate what I saw that day to you now.

Yes. Perhaps it was my karma to move to my new neighborhood last week, and perhaps it was karma that I was across the street with a clear view of Eric Garner as he died. And maybe it’s your karma to be here now to read my words as I relate the tale, so we can all feel better about it.

There. Does that help? I know that, for me, thinking about it that way is a lot easier than dwelling on the knowledge that, at the time, I felt compelled to step in and stop it yet I did nothing… just like everyone else there at the time.

Frankly though: I’d much rather live in a world where Eric Garner was still alive, he remained a complete stranger to me, and I had nothing to say to you about this. I would prefer to live in a world where I didn’t have to notice that one man of one particular skin tone was brought down and killed by other men of a different skin tone over the finer points of tobacco taxation.

Or, who knows? Maybe those cops were just having a bad day, and it was hot, and things got out of hand, and race had nothing to do with it, and mistakes were made.

As much as I want to believe that, I can’t. And neither should you.

And if you feel the least bit differently about this matter… if you want to just take it that way and move on with your busy life… may I kindly suggest you investigate the concept of “karma” a little further yourself?

read next post
Weekly Horoscope For Those Still Earthbound, July 21-27, 2014
archives most recent
More from Beliefnet and our partners
previous posts