The Astrology Of Godzilla (No, Really) 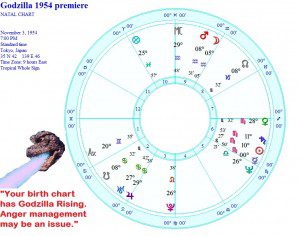 “History shows again and again how nature points out the folly of men.”

Some of you reading this will be Godzilla fans, and I have your attention. For those of you unfamiliar with the character, or who think of him as primarily a silly monster in a rubber suit from a badly-dubbed movie with terrible production values — give me a moment of your time.

Great fiction can enlighten as well as entertain. And when I say “great fiction,” I’m not necessarily referring to what are considered “the great works of literature.” I am referring to those works of fiction that lodge themselves in the popular consciousness for long periods of time… stories that grow in significance well beyond the boundaries of an hour’s entertainment. The world now awaits with breathless anticipation the return of one of those great fictional creations: Godzilla.

Godzilla first appeared in 1954, a Japanese film made at a time when the American Occupation force was still in charge of most things, and there were strict limits on what a filmmaker could show and talk about. And Japan — a nation that had long understood the power of earthquakes and tsunamis and typhoons — had been exposed to the first human creation that could stand beside those phenomena in terms of pure, incomprehensible destructive power: the atomic bomb. As any decent psychiatrist could tell you, if you force a traumatic event deep down into your subconscious and do your very best to not think or talk about it, sometimes A Monster will arise as a result. Enter Godzilla.

For those of you who haven’t seen it, the first Godzilla film in 1954 is surprisingly well made, thoughtful, and intelligent. It was also the most expensive Japanese movie released to date, other than another film from that year you may have heard of — The Seven Samurai. Godzilla, although on the surface intended as mere entertainment, became a way for the Japanese people to address the unspoken concern that Human Nature had opened the Pandora’s Box of nuclear fire. Given the state of world affairs in the mid-50s, it’s perhaps no surprise that Godzilla was popular elsewhere in the world too. Perhaps a Monster can speak more eloquently to our fears than Reason can.

We stand now in the shadow of the Uranus-Pluto square, and many of us fret over the consequences of Genetically Modified Organisms, we are all in the grip of economic conditions beyond the control of all but a few, and the reactor at Fukushima still leaks radiation. Has there ever been a better time for The King Of The Monsters to rise again and raise havoc across our movie screens?

As I have shown in previous articles about such fictional works as Doctor Who and The Room, and even business ventures such as Bitcoin, all events have a “birth chart” just like a person does, and that birth chart tends to describe both the nature and potential success of the venture involved with uncanny accuracy. The “birth chart” of Godzilla is no exception.

The first Godzilla film premiered on November 3, 1954 in Tokyo. I haven’t been able to pin down the time of the premiere, but 7 PM seems reasonable. The chart is a powerful one, and reflects the nature of Godzilla himself. Sun conjunct Saturn in Scorpio, square Moon and Mars conjunct in Aquarius, is potentially a recipe for wrathful destruction. And if there is anything in astrology that is a perfect metaphor for “large and strange,” it’s a Jupiter-Uranus conjunction.

The premier chart also shows strong potential for profitability. Jupiter and Uranus conjunct in the Second House (which rules money and profitability in general) is often a good sign of unexpected financial success. That Second House is ruled by a waxing Moon, which is in the Ninth House. That Moon is conjunct Mars, which rules the Tenth House (business in general). Furthermore, in a venture like this, the Ninth House rules “foreign business,” and Godzilla films have always made a fair portion of their box office in countries outside of Japan.

From a business perspective, the transits to the 1954 premiere chart are pretty impressive. Transiting Jupiter is in “Godzilla’s” second house, and transiting Venus is sextile “Godzilla’s” moon which rules the Second House. That’s a recipe for near-certain financial success.