Ludwig van Beethoven was already well on his way to being deaf as a post in 1817 when he received the commission to start the work, and for whatever reason, he didn’t even roll up his sleeves and get busy with it until the fall of 1822. Much of it wasn’t even truly original work. Ludwig lifted an idea from his own Choral Fantasy (Opus 80) written in 1808. The lyrics came from Friedrich Schiller’s poetry… a piece that other composers had already been setting to music for over thirty years by that point. So really, it’s not like Beethoven really had anything new to say, was it?

“He does no work. All he does is scribble incomprehensible phrases. Then he bellows this stupid, childish tune at the top of his lungs… dadadada NAnanana, nanananaNAA na… He says this is the motif of a grand symphony. I think it’s ridiculous.”
-Immortal Beloved

But: something amazing can happen if you are lucky enough to have been born at a time when, at some point in your life, both transiting Jupiter and Saturn are doing good things for your Neptune.

Hey — you know that project Beethoven had been sitting on for years? That thing he’d avoided for so long… what with all the health problems and the deafness and the lack of money for his live performances taking up so much of his time and attention… he could have been forgiven for forgetting about it completely? The one he didn’t get rolling on until he was starting to get old and sick and was stone deaf?

It turns out it was the greatest piece of music ever composed.

Now: click on “play” below and read the rest of what I have to say to you.

I know, I know… it hasn’t always been easy lately. Yes: there’s a Uranus-Pluto square that’s been going on for far too long. And sure, the other transits and eclipses and whatnot have likely been blocking your moves for a while now. It’s not easy following your Dream when you’ve got bills to pay and invoices to file and laundry to do. Maybe you got tired. Maybe you got discouraged. But that’s okay… you can’t have lost Hope unless you had some in the first place, and if you leave the door open for it, Hope has this strange way of wandering back in when you least expected it to. But you have to remember to leave that door open.

(Oh friends, not these sounds! Let us instead strike up more pleasing and more joyful ones. Joy!)

Whatever your Neptune has left bubbling away in the deep background of your heart and your head for a while now is still there. Want to start a business? Plant a garden? Have a baby? Write a novel? Start a relationship? Learn the violin? Open a lemonade stand? I don’t know. Your individual details are yours, and your mileage may vary. Somewhere out there, before you were even born, someone had started businesses and planted and had babies and written novels and started relationships and learned the violin and opened lemonade stands… and maybe your results won’t be any better. Or maybe they will.

But now is he time to start finding out.

Something amazing awaits on the other side of it all. 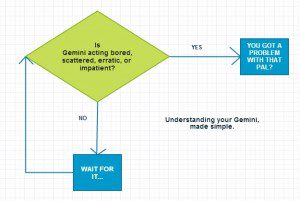 The Gemini Manual, Chapter 23: A Troubleshooting Guide
archives most recent
More from Beliefnet and our partners
previous posts

Sacha Baron Cohen (born October 13th 1971, time unknown, London England) is a comedian — but not a typical stand-up telling jokes. He’s a chameleon who vanishes into roles and, rather than make jokes about the hypocrisy of others, he plays into their worldview until they expose themselves. In other words: he’s the comedic equivalent […]

(This is part of the Mars in Aries series I will be running throughout the rest of this year. Mars is going to spend a ridiculously long time in Aries, and the more prepared you are for it, the better. CLICK HERE for the introduction to this series.) THIS WEEK: Mars covers the distance between […]

Good News From Saturn And Pluto In Capricorn?

It seems like whenever I talk about Saturn and Pluto in Capricorn, it’s always within the context of something terrible going on. Admittedly, since the conjunction between the two planets was exact earlier this year, the world has been kind of a wreck. And yet it’s not as if on any given day everyone on […]

Ask An Astrologer: Retrograde Planets In My Birth Chart

(This is part of the “Ask An Astrologer” series, where I occasionally try to demonstrate how getting a consultation can genuinely help and provide real guidance, using real-life examples. Want to find out for yourself? There’s a link to my e-mail at the bottom of this blog entry.) RJ writes: “What is the significance of […]