The first Tuesday of November has come. The 2020 election is all but over, although many races will take days, if not weeks, to call. The country can collectively exhale. An exhausted and exasperated nation will soon wake up to … Wednesday morning.

As critical as the first Tuesday after the first Monday of November is, America is always driven forward by the following Wednesday.

The drive to Election Day — with its focus on power and control, winners and losers — distracts us from more important conversation and more pressing problems in America. Both sides of the political aisle have breathlessly declared that if their enemies in the other party win the election and assume control, Armageddon will ensue, grandma will be pushed off the cliff and our children will be doomed to destruction. That has never proven to be the case in America. It is time for Wednesday.

For the past two election cycles, I have attempted to draw attention to the Wednesday after Election Day, knowing the answers to what ails the nation are not to be found in Washington but in our homes and neighborhoods. On that morning, citizens in towns and cities across the country go to work, provide for loved ones, start businesses, get children to school, help a neighbor in need, volunteer in their community, reach out to struggling friends and engage in the very free market economy and institutions of civil society that have driven American freedom for over two centuries.

It is as though the politically obsessed have lost their knowledge of history. The country has survived fierce division and hotly contested elections in the past. And despite the negative chatter and clamor of flailing political consultants and media experts, Wednesday morning always comes, and the country moves on.

In fact, American history is filled with “Wednesday mornings.” Following great wars, social strife, scandals at the highest levels of government, terrorist attacks, riots, mass shootings and contested elections, Wednesday morning has always come, and it comes because the American people make it come with a belief in better days.

Despite the constant drumbeat bemoaning a deeply divided and angry America, I remain convinced that the American people are starving for elevated dialogue, searching for inspiring ideas and striving to find hope in heroes worthy of emulation. As always, a look back in history provides a clear vision of what is needed for a 2020 version of “Wednesday morning.”

Thomas Jefferson was a compelling and complex, inspired and flawed human — as all of us are. He was a slave owner who also provided words and leadership that compelled Americans toward building bridges of unity, harmony and opportunity. His first inaugural address is instructive in our divisive and turmoil-ridden time.

President Jefferson won an election so nasty and contentious that many feared the race was going to lead to riots, rebellion or even revolution. In a sign of humility and as a signal to national unity, Jefferson entered the Senate chamber of the Capitol dressed as an ordinary citizen. Washington and Adams had both worn ceremonial swords as they took the oath of office. Thomas Jefferson left the sword at home.

Jefferson said, “All, too, will bear in mind this sacred principle, that though the will of the majority is in all cases to prevail, that will to be rightful must be reasonable; that the minority possess their equal rights, which equal law must protect, … Let us, then, fellow-citizens, unite with one heart and one mind.”

Unity is not found in conformity. Jefferson recognized that oneness was not sameness in America and that the fledgling constitutional republic was dependent on people disagreeing better, not less. He knew that oneness was found in a Wednesday morning approach to all that united the nation. Jefferson eloquently declared to the people that “every difference of opinion is not a difference of principle.”

To honor the first Wednesday of November this year, we too should leave our “virtual swords” at home. We should lay down our twitter-rants and verbal assault weapons. We must stop demonizing those with differing opinions or question the patriotism of those whose approach to policy or progress is contrary to our own.

I reflected back this week on the tumultuous election cycle of 2016. I remembered that I had gained perspective on the power of the “Wednesday morning” that year in a most unlikely spot — a 1k Donut Run. (The length of the run is perfect, especially for the out-of-shape and donut-hungry types like me.)

I admit I was a little exhausted that November morning in 2016; actually, I was downright discouraged and weary. All of that changed as I arrived at what was then the 3rd annual 1k Donut Run and charity fundraiser for our little neighborhood, sponsored by my friend Denise Anderson.

As I looked around the crowd, there was an energy and buzz of excitement. Smiling faces everywhere. I saw a number college students who had spotted the run on social media and decided to drop in. I saw young kids from our neighborhood running around and playing games in the grassy bowl. (I think they ran more before the race than during race). I witnessed parents and friends from our community having conversations on topics that ranged from sports to caring for aging parents to what an absolutely gorgeous fall day it was. There was even a United States senator, who used to live in the neighborhood, and a local county commissioner, there to lend support.

The organizers gathered the group together with a small bullhorn and thanked everyone for being part of something that mattered. The senator made a few quips about the length of the race and how everyone would have to be determined and willing to endure in order to get to the donuts waiting at the end of the street. Then he repeated a line I had heard him say countless times in the past, “That because of people like you, America’s best days are still ahead.”

I stepped back and looked at the scene of a community coming together to do good. Denise had not received a mandate from Congress to create such an event. No one there was threatened with imprisonment or a tax penalty if they didn’t participate. They just came — because that is what Americans do, especially on Wednesday mornings.

With the sound of the bullhorn, the race began and was over in a matter of minutes. The donuts and hot chocolate were great, the laughs, smiles and conversations continued as neighbors and friends lingered for well over an hour. My hope, energy and confidence was restored as I was reminded what truly drives freedom — ordinary people, in ordinary neighborhoods, doing seemingly ordinary things, but in so doing, making America most extraordinary.

Presidential politics hadn’t played a role at all. In fact, the only real mention I heard of presidential politics was Denise describing a conversation she had with her young daughter. She said that for her family, the moment an election ended they began to include the president, or president-elect, in their prayers, just as they had prayed for past presidents of both political parties, because that is also what Americans do on Wednesday mornings.

The American Civil War was an extended “Tuesday test” for the country. America was divided, the fabric of society was tattered and the future of the nation seemed to hang by a thread.

In a singular “Wednesday morning” moment on a battlefield at Gettysburg, President Abraham Lincoln challenged the living to step boldly and nobly into a new day.

We often quote and rightly reference Lincoln’s address when we honor those who have paid the ultimate price while standing for the principles of freedom. We note that the honored dead, “gave the last full measure of devotion.” We often miss, however, Lincoln’s powerful and immediate pivot to the future — to us. In the crescendo and cadence of freedom, he called on our better angels, saying it is “for us the living,” that “we be here dedicated,” that “we take increased devotion” and above all, that “we here highly resolve …”

Lincoln recognized that those he honored on that extraordinary “Wednesday morning” moment had already paid the price, done their part and passed their test. He knew the real question was a question for the ages: whether each of us would be highly resolved to do our individual duty on our own Wednesday mornings.

The question of our commitment to “Wednesday morning” is simple. As Lincoln asked, will we take increased devotion to the principles that have fostered the greatest civilization the world has ever known? Will we be so dedicated to the unfinished work and the task before us? Will we be as highly resolved to the cause of freedom as those who have gone before? Our answers to these questions will have profound consequences for our country.

Our communities need more highly resolved women and men who care about creating better neighborhoods and a better nation.

Whether our candidates or causes prevailed on this first Tuesday of November, we can be thankful for that ultimate right to raise our voices and vote our values. After the votes are counted and the victors declared we should remember that the real strength of the nation lies in its people, its neighborhoods, its homes and its families. That is why in America, Wednesday morning always comes. 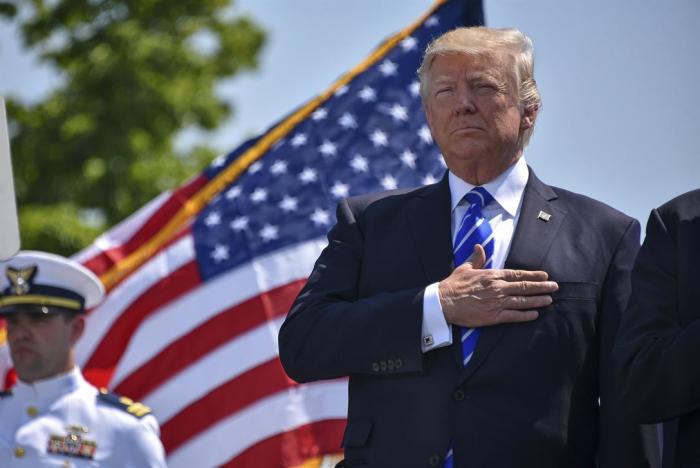 President Trump Now Says He is a ‘Nondenominational Christian,’ Opens Up About Faith
archives most recent
More from Beliefnet and our partners
previous posts