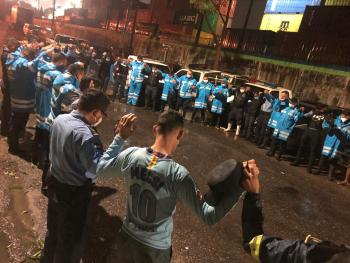 As hurricane Iota hit landfall this week, local police officers and a church congregation in Honduras joined together to lift up prayers to God and ask for His protection.

Iota, which is now a tropical storm, was the second hurricane to hit Central America this month. It followed Hurricane Eta which made landfall on November 3rd. Honduras is still reeling from Eta’s effects and struggled to prepare for Iota’s landfall. While over 600 temporary shelters were erected to help Hondurans, many are concerned that there is a lack of emergency supplies.

The National Police of Honduras tweeted out video footage and photos of large groups of officers and church members praying together as they anticipate the hurricane’s arrival.

Many residents in the regions surrounding the capital were evacuated due to the risk of flooding and landslides. Residents along the country’s remote coast were also evacuated for fear of flash flooding.

According to the Associated Press, Hurricane Iota is the 30th named storm of this year amid a record-breaking active hurricane season.

Megan Bailey is a Social Media Specialist and Content Producer for Beliefnet. She attended James Madison University where she received a degree in psychology.
read next post

A Brother in Florida Saved His Sister From a Shark Attack, Now Her Family Leans on God as She Recovers

17-year-old Addison Bethea had her world turned upside down in late June when she was bitten by a shark while searching for scallops near Keaton Beach, Florida. Addison is a cheerleader and a tennis player. And she’s also relatively young to experience an accident and crisis of this magnitude. However, Miss Addison Bethea has a […]

Lydia Franklin says her church leaders don’t talk much about politics. However, they talk about Jesus, His commands to love your neighbors, and the importance of Christians helping others. So when the 18-year-old went to the polls for the first time this election, she took those values into the voting booth. Franklin, who lives in […]

A high school in Pasco County, Florida, is dealing with controversy after a Jewish employee of the school filed a complaint against the public display of a Bible verse on a teacher’s paid parking spot. Per WFLA-TV, Marina Gentilesco, an employee of Pasco County Schools, walks by the parking spot daily with Philippians 4:13 written on it. Despite […]

Multiethnic Church Pastor Says Identity Should Come From the Cross, Not One's Race

A black pastor of a multiethnic church recently shared how he identifies more with the cross than with the color of his skin and believes a Christian’s identity should be rooted in Jesus, not race. “A lot of people, they look at themselves as a black person or a white person or a Hispanic person,” […]