Rare Blue Moon Will Illuminate the Sky on Halloween

A blue moon will light up the night sky this Halloween. This only happens once every two and a half years, on average, NASA’s National Space Science Data Center reports.

October’s first full moon, also referred to as the harvest moon, appeared on the first day of the month, the blue moon, or the second full moon, can be seen on October 31st. We have not seen another blue moon occurrence in the Americas since March 2018, CNN reports.

Every month has a full moon, but because of how the lunar cycle and the calendar year aren’t entirely synched, we end up with two in the same calendar month every three years or so.

It is called a blue moon because it’ll be the second of two full moons that occurs in a single calendar month.

Another interesting fact is that when the phrase “once in a blue moon” was first used, it described something so rare, you wouldn’t believe you’d see it in your lifetime, NASA reports.

So just how will the blue moon appear to us? The dark blue tone of the evening sky will impact the coloring that we see, but Earth’s satellite will likely not appear blue at all. Most blue moons are not blue, and those that are usually aren’t necessarily full.

The photos that we do see of blue moons are usually created using special filters. The blue moons we hear about now are typically blue in name only.

When a moon has a bluish hue, it results from smoke or dust particles in the atmosphere, often seen during a massive volcanic eruption.

The full moon you’ll see on October 31st may not look blue to us, but it will undoubtedly catch your attention and make Halloween seem a little spookier.

Are you looking forward to this weekend’s blue moon? 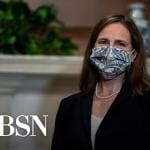 The transportation secretary is encouraging evangelical Christians who are concerned about getting the COVID-19 vaccine to take into consideration that it might be “part of God’s plan.” Buttigieg, who is Christian, was asked by “State of the Union” host Jake Tapper about the high number of white evangelicals who refuse to get a COVID-19 vaccine. […]

The belief that Donald Trump was a Messiah ran rampant during his time in office. While many Evangelicals supported Trump because they believed he shared the same politics and values, some supported him because they thought he was a Messiah. They saw Trump as infallible and became his disciples. Pastor Franz Gerber was worried that […]

Sen. Raphael Warnock has been accused of heresy after he asserted that people could save themselves through works and without the need for Jesus in a now-deleted tweet. Critics quickly condemned the statement arguing the Bible clearly states no man can save himself. “The meaning of Easter is more transcendent than the resurrection of Jesus […]

'It's Consistent With Scripture': Franklin Graham Urges Christians to Take the COVID-19 Vaccine

Evangelical leader Franklin Graham is expressing his support for COVID-19 vaccines. In a bold statement, the son of the late Rev. Billy Graham said Jesus would have “made reference to and used” vaccines if they were in his time. In a recent interview with ABC News, which examined the divide within the Christian community around […]