Faith Leaders Warn Against the Rise of “Christian Nationalism” 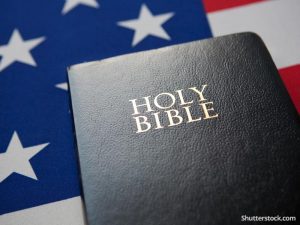 A group of Christian leaders has condemned Christian nationalism in a new letter, calling it a “persistent threat to both our religious communities and our democracy.”

Published on July 29th, the letter, organized by the Baptist Joint Committee for Religious Liberty and titled “Christians Against Christian Nationalism”, calls Americans to take a step back from mixing faith with the government.

“As Christians, we are bound to Christ, not by citizenship, but by faith,” the statement reads. “Christian nationalism seeks to merge Christian and American identities, distorting both the Christian faith and America’s constitutional democracy.”

The group’s executive director, Amanda Tyler, says that Christian Nationalism is not new but is more important now than ever.

Over the course of the past week, the statement has already received an additional nearly 6,000 signatures that come from all different states and a wide range of denominations.

“Whether we worship at a church, mosque, synagogue, or temple, America has no second-class faiths. All are equal under the U.S. Constitution.”

For a deeper understanding of Christian Nationalism, you can watch the keynote speaker below.

Millennials Increasingly Are Finding Spirituality in Astrology, Crystals Over Christianity
archives most recent
More from Beliefnet and our partners
previous posts

God Put a Rainbow Scarf Cloud In the Sky, Displaying His Majesty and Wonder

God is magical, and He occasionally allows us to witness His magic. One such video of a rare rainbow pileus (or ‘scarf’) cloud captured in China’s Haikou City is going viral on social media. Several users on Twitter have shared it. The video shows a mesmerizing view of rainbow colored scarf cloud over the city. […]

A Missouri pastor has apologized after a video clip in which he threw a spiritualized tantrum from the pulpit and called his congregation “broke, busted and disgusted” and “cheap sons and daughters” for not “honoring” him with a watch from the luxury brand Movado went viral. The pastor, Carlton Funderburke of Church at the Well Kansas City, confirmed in a video posted […]

Christian Comedian Tim Hawkins recently sat down with The Christian Post to discuss comedy and his upcoming tour, which begins in North Carolina August 20. Known for his parodies of popular songs, such as a parody of the song “Hey There Delilah” done through the point of view of the Biblical Samson, the 30-year comedy […]