On Tuesday, the United Methodist Church voted to strengthen its ban on gay clergy and same-sex marriages. This is a decision that could ultimately split the country’s second largest Protestant Church.

Delegates voted 438 to 384 at a special session of the church’s General Conference to pass what was called the Traditional Plan maintaining the church’s rules.

Prior, delegates also had defeated The One Church Plan. This plan would have allowed individual churches to decide how they handle issues of sexuality of their clergy and same-sex weddings.

In spite of emotional warnings from delegates like Rev. Tom Berlin who compared The Traditional Plan to a virus that would cause a dire sickness in America’s Methodist community, it still prevailed.

At this special session of the General Conference, clergy and lay members of the church were weighing in on how to a 2018 report from a special church commission on revisiting the Methodists’ guiding Book of Discipline.

Initially when the commission formed, the Council of Bishops said it has heard many criticisms that the Book of Discipline “contains language which is contradictory, unnecessarily hurtful and inadequate for the variety of local, regional and global contexts.”

The report took a deeper look not only on sexuality but also ways to strengthen the unity of a religious body that holds a variety of views. The conference itself showed that there is a wide diversity of opinions about those views. Bishops recommended endorsing the One Church Plan.

The Conference was also taking place during a period when reports came out that an increasing number of Methodist clergy have come out as a gay.

Ultimately, the decision has left the church split. A divide in the United Methodist Church, which has 12 million members worldwide, appears inevitable. Supporters of change are now left considering whether to remain in the church – and what the result says about the church.

Jeffrey Warren, a young gay delegate from the Upper New York conference, told fellow conference attendees on Monday that he evangelizes on his college campus. He has been able to reaching a diverse range of people for a significant reason.

“They said they have not heard this message before,” Warren said. “They didn’t know God could love them, because their churches said God didn’t.”

The Rev. Tom Berlin of Virginia also attempted to rally support for the One Church Initiative calling it the “only short at change” for people LGBTQ members of the church who want to be ordained and same-sex couples who want to be married.

Berlin was addressing those delegates who might have withheld their vote because they felt the plan didn’t go far enough. “I doubt you’re going to get a better offer today,” he said.

While some spoke in favor of the idea others spoke against the idea. There were some who faulted the way the conversation was playing out and believed the way the plan had been discussed was harmful to the church. Cara Nicklas of Oklahoma who was also in opposition of the One Church Plan didn’t like the way the impassioned debate played out over the church’s competing plans.

“By those advocating for the One Church Plan, I was either told explicitly that I am mean-spirited and unloving for holding the church’s doctrine on same-sex relationships or the general tenor or the communications implied that I am unloving if I don’t agree to change the church’s Discipline…” Nicklas said.

“When that is the message – when gay persons become convinced I don’t love them because I don’t condone their behavior it hurts my relationships with them,” Nicklas said.

Nancy Denardo, a lay delegate of western Pennsylvania, cited the Bible’s mention of marriage as being between a man and woman in the Book of Matthew.

“The One Church Plan does not agree with the words of our savior,” Denardo said. She warned that it “deceives young persons into believe that same-gender marriage is OK with God – when it clearly it is not.” 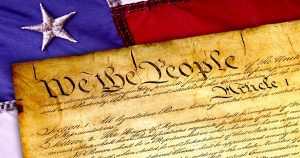 Rare George Washington Letter Surfaces, Praising God For the US Constitution
archives most recent
More from Beliefnet and our partners
previous posts