While most people seem to take to Twitter to rage and complain these days, one nun has decided to react to “the crazy” in the world in a very different way. Rather than joining in the name-calling and open hatred that dominates the internet today, Sister Susan Francois has made it a point to tweet prayers to Donald Trump every morning.

“I usually just sit for a while and see what comes,” Sister Francois said.

Sister Francois began her practice shortly after President Trump’s inauguration. She has since racked up over 660 prayers sent to Trump’s official @POTUS handle. The decision to aim the tweets at @POTUS was a deliberate choice on Sister Francois’ part. She is aware that Trump’s @realDonaldTrump handle is both more popular and more widely used, but the @POTUS handle is archived by the federal government.

“I want it to be a record of history that a Catholic sister wanted to tweet a nonviolent prayer at the president,” Sister Francois said.

Her habit, however, has not always been easy. In fact, she said that her daily tweets are “the hardest spiritual practice I’ve every committed to.” Part of the reason it has been so difficult is the very public nature of her practice. “When I sent the first tweet, it was purely for myself. I didn’t expect it to make a big splash. But [the] fact that it was public and that I committed to it every day means I have to do it, even if I don’t want to.”

Sister Francois is under no illusions about how likely her tweets are to reach Trump himself, but that will not stop her from continuing to reach out to him with her hopes and prayers. “Am I under the misconception that he is reading my tweets or that they will have an impact on his policies,” she wrote on Twitter. “No. But I am less distracted by the crazy, claiming my voice and speaking out in a way that models and points to the world Jesus calls us to build.” She, naturally, hopes her words will somehow make a difference in the world, but even if they never make a big splash, they have helped at least one person by keeping Sister Francois from getting lost in all the negativity. As such, at the very least her “calming spiritual practice” has succeeded at what she set out meaning for it to do. 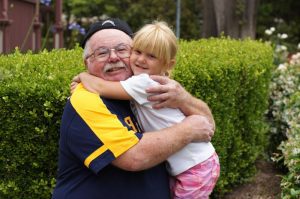