Has Barack Obama’s endorsement of same-sex marriage undermined his support among black churches?

When President Barack Obama announced his support for homosexual marriage, a number of black pastors and Christian leaders were caught off guard – and even embarrassed. On the one hand, they supported the first black president, but on the other hand could not endorse his flip-flop on what they consider one of the most important moral issues of our day — an issue that threatens the very foundations of the traditional family.

Some leaders remained silent. Others took issue with Obama’s startling switch and stated that they could not vote for a president who endorsed a view that they believe is contrary to God’s Word. Some expressed disappointment and shock in the President who previously claimed that he believed marriage was a “sacred union” between a man and a woman.

On the other hand, the new pastor at Obama’s home church in Chicago, Trinity United Church of Christ, the Rev. Otis Moss III, wrote a public letter expressing his view that black churches should still support the president in the November election – no matter how they feel on moral and scriptural issues. He released a video of himself reading that letter – accusing other black clergy of hiding “from true dialogue with quick dismissive claims devised from poor biblical scholarship.”

He urges ministers to stand behind Obama despite any disagreements with his policies.

He was not alone. The Rev. Wallace Charles Smith, pastor of Washington, D.C.’s large Shiloh Baptist Church supported the President with the caveat that “we preferred that he had not weighed in on the issue.”

However, Baltimore clergyman and state legislator Rev. Emmett Burns said “People have come up to me saying they don’t support this, they don’t like this. They are disappointed with the president, and they plan to stay home” on election day. He said those he had spoken with could not support Romney, so would just not vote this time around.

Marvin Randolph, Senior Vice President of Campaigns for the NAACP, expressed concern to CNN that such an attitude by key leaders in the black religious community could lead to fewer African-American voters engaged in this election. “We have to make sure that African Americans don’t stay home this year by reminding them what’s at stake,” he said.

On the other hand, Daniel Whyte III, president of the Gospel Light Society, said he found Obama’s position “troubling in light of God’s Word.” Whyte encouraged fellow pastors to stay true to what Whyte believes the Bible “clearly states about homosexuality.”

“President Obama did not exercise good judgment” when he made the endorsement of same-sex marriage, said Whyte. The church should “love all people who are engaged in any sin, including the abomination of homosexuality, but should not abandon God’s word and endorse their sin.”

“You accuse these preachers who say they cannot support President Obama of hiding ‘from true dialogue,’” says Whyte in an open letter to Moss. “No ‘dialogue’ is really necessary on this matter. As you know, and as many Bible scholars and seminary professors will tell you, the best way of studying and understanding Scripture is through plain, literal interpretation of the text. There is no need to have any ‘dialogue’ about the plain, clear teaching of what God said. There is no need to complicate something that the Bible makes plain. Yes, there are some prophetic passages in the Bible that are clearly meant to be taken symbolically, but the issue at hand is not one of those. The issue of homosexuality, not to mention homosexual marriage, is something on which the Bible speaks very clearly.”

Black religious leaders “love President Barack Obama,” writes William Douglas for the McClatchy news service. “But when it comes to his support for same-sex marriage, some of the nation’s leading African-American clergy are divided, sometimes passionately.”

“I love all homosexual brothers and sisters, but my discipline says I can’t marry them,” said Bishop John Adams, an African Methodist Episcopal minister and former chairman of the Conference of National Black Churches. “Same-sex marriages are not being approved by the Christian community because it is a contradiction of creation. The species continues by the procreation of male and female.”

The nine denominations of the conference, which reach 10 million people, all oppose gay marriage, said the Rev. Dr. Franklyn Richardson, the group’s chairman.

“While President Obama’s support for gay marriage is sure to fire up parts of the liberal base, it could alienate others — including black voters,” observed CNN’s Jack Cafferty. “In other words, backing same-sex marriage might be a risky position for the president in an election year when it comes to one of his core voting blocs.

“In 2008, African-Americans were crucial in making Mr. Obama the nation’s first black president. Exit polls showed 96% of black voters supported him and they made up 13% of the electorate.”

“Fast forward four years: While polls suggest America on the whole is moving toward support of same-sex marriage, ABC/Washington Post polling shows 55 percent of black voters are still against it. That compares to 43% of whites.”

This opposition from blacks could hurt the president — particularly in the South, noted Cafferty. “Just this week in North Carolina, blacks voted two-to-one in favor of the constitutional amendment banning gay marriage. North Carolina is a swing state where near-unanimous black support for Mr. Obama secured his 2008 victory.

“While it’s unlikely blacks will suddenly decide to vote for Mitt Romney over this, if some of them decide to stay home, it could make a difference in the outcome of the election.” 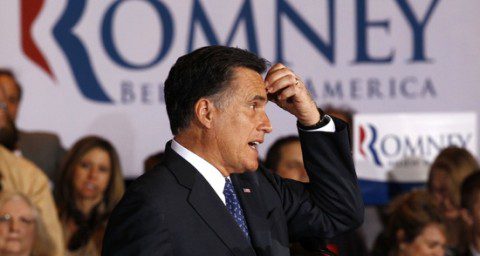 So, the GOP finally has a candidate
archives most recent
More from Beliefnet and our partners
previous posts