Has T.D. Jakes ever had to forgive?

“Oh, yes,” answers the author of the new book Let It Go: Forgive So You Can Be Forgiven and pastor of The Potter’s House, a 30,000-member church in Dallas.

“I was born in West Virginia in the 1960s in an area that was about 5 percent African-American. So, growing up, I had plenty of opportunities to forgive,” he recalls. “I’ve had a lot of practice.”

Today, his congregation is used to hearing him share stories of his own struggle with “letting go” of past hurts and disappointments. Jakes has spoken on the issue so many times that he had plenty of material for a book. In it, he explores why people insist on holding onto past heartache, pain and grudges. He also offers insights on how to forgive.

He says he was also moved to write on forgiveness as he watched the constant conflicts of politics. Not so long ago, he led an early morning prayer service for President Barack Obama at St. John’s Church in Washington, D.C. – not a new role for him as he has advised other presidents as well. In his book Decision Points, George W. Bush described Jakes as “a kind of man who puts faith into action.”

Moving in such high circles, has Jakes ever had trouble forgiving? “Every relationship has its challenges,” he admits. “I look around and see people at each other’s throats, constantly blaming each other for what is wrong in our world. I am disturbed by the times in which we live. The death of civility in our generation is disturbing. The conflicts in politics have reached a level whereby we have lost all sensibility and reason.”

Forgiveness is key to society’s survival, he says. Inability to forgive is “a cancer that left unattended will spread.”

Jakes not only writes books and preaches, but was executive producer for the film Jumping the Broom last year as well as Woman Thou Art Loosed currently in theaters – and an upcoming movie featuring the late Whitney Houston. Does he ever wish he had said something that might have touched Houston – that might have saved her life?

“I didn’t know her until she came to work on the set of the film,” he says, “but I don’t think that people really accept therapy and counseling from people that they’ve just met. So, I don’t have that kind of struggle, but I certainly do with people I knew well. I’ve thought maybe if I had said something else or if I had done something else I could have really made a difference. But really making a difference in somebody’s life is a very strong investment of time and energy and closeness.

“I don’t think many times people really respond well to people that they have no reason to open up to. A friend of mine one said ‘The kingdom of God advances amongst friends.’ That is so true.”

What about the rest of us, who kick ourselves, knowing we should have done something when we sat silent?

“Most people find it difficult to forgive themselves. I notice that people who were well-nurtured and experienced forgiveness at an early age, they have an easier path to forgiving.”

But how can we forgive those who have done terrible things – such as the murdering of hundreds of thousands of people in Rwanda or Bosnia or Sudan? What about Hitler’s holocaust?

“You can only forgive those kinds of atrocities when you understand that the person who perpetrated them had to be sick. No normal person would commit such acts. If you are seeking a place of forgiveness, it begins with understanding. It’s difficult to hate and understand at the same time. It helps you find that place in your heart that often hides itself from human view.”

What about the unrepentant offender who continues to hurt you and even throw it in your face?

“Think of Jesus on the cross, praying ‘Father, forgive them for they know not what they do,’” answers Jakes. “Notice the fact that he’s praying for their forgiveness – for people who are crucifying Him and not asking for forgiveness.

“There are people who are in abusive situations right now and in harm’s way – domestic violence, sexual abuse and what have you. So, I’m not saying to stay in danger. Justice and forgiveness can co-habitate. Forgiveness does not have to compromise justice.”

What if the person refuses to accept your forgiveness?

“Well, that is on them,” answers Jakes. “That’s their responsibility. You don’t have to give an account for somebody else’s attitude or the choices that they make. This is about you.

“Forgiveness does not exonerate the perpetrator. Forgiveness liberates the victim. It’s a gift you give yourself. It has less to do with what somebody else did as much as it does with your decision to move on with your life and not be continually victimized by rehearsing that issue or incident over and over again.

He also writes about how he learned that anger is not always negative.

“Anger sets boundaries and limitations. It lets people know when they’ve gone too far. It causes of us to snatch our children out of harm’s way and protect those we love. Anger fuels our adrenaline glands for fight or flight. The Bible says be angry and do not sin, so anger in itself is definitely not a sin.

“The Bible says that anger rests in the bosom of fools. It is not the presence of anger that is destructive, but when you sleep on it and live with it and rehearse it and allow it to turn into bitterness. It develops a kind of toxicity that is a deterrent to your well-being, your happiness and your health – how you raise your children and how you react to the most simple conflicts.

“Jesus says clearly offenses will come. No matter who you are, the one guarantee you have about life is that you be offended. The book is about how you deal with those offenses.”

“It has less to do with the guilty person’s reaction to it. It’s about coming into a place where you say, ‘I’m not going to be victimized twice by allowing this to continue to operate in my life and affect my judgment.

“Understand that forgiveness is not a white flag of defeat.

“But I think what I really wanted to say in this book is to share with people that if you hold on to anger and unforgiveness, you’re not available for what’s next.

“You’re not ready yet for what God has for you.” 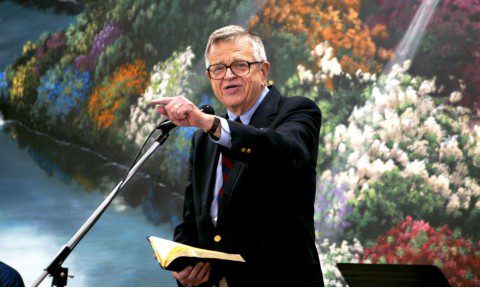 Chuck Colson: Beyond Watergate
archives most recent
More from Beliefnet and our partners
previous posts