Will Egypt become the next Pakistan?

by Sherif Meleka
Special to Beliefnet

A few days ago, I was watching a popular Egyptian talk show, Fil Midan, or “In the Square.” It had a very interesting guest, a leader of a salafi Islamic political faction. He maintained a pleasantly tranquil smile and a relaxed appearance throughout the program, wearing his typically Pakistani outerwear and hat.

The host, Amr Al-Leithy, was pretending to be eager to corner him, asking tough questions, but it was obvious to me as time went on, that he was not serious about laying a glove on him. It was pretentious.

The host constantly maintained a neutral grin to all kinds of extreme responses from his revered guest. Even though I had not seen this “leader” before, I found out as the interview continued that he was a prominent Islamic figure, with his own show on a satellite TV channel; Sheikh Mahmoud Al-Masry, a.k.a. Abou ‘Ammar, who formerly served as an imam in Saudia Arabia and other Gulf states mosques, and participated in an official series of sermons at the Islamic Center in Brooklyn, NY during the aftermath of the 9/11 attacks.

Sheikh Mahmoud Al-Masry was saying truly horrific things. For instance, he said that the 9/11 attacks turned out to be a blessing in disguise because they drew the attention of hundreds of thousands of Americans toward Islam. When some actually approached him for answers regarding this Muslim aggression, he introduced them to Islam’s holy commands, which led to scores of conversions. Of course, he never mentioned the countless funds that were spent to convert those mostly inner city folk, and those in confinement, nor did he disclose their source. When it came time to discuss non-Muslims, he used the usual line that real Muslims carry no animosities towards non-Muslims, in Egypt or abroad. After being confronted by the show’s host about the repeated attacks, burnings and destruction of Coptic Churches, he reluctantly admitted that there are – of course – exceptions in every group but that actions of a few should not blemish the majority.

The Sheikh then proceeded to discuss tourism. He softly said that Egypt should enforce a strict dress code for everyone, Egyptians and foreign tourists alike, and prohibit all religiously forbidden actions, like drinking alcohol. There were two reasons why he believes these measures must be taken. First, based on his interpretation of Shari ‘a, a Muslim is forbidden from attending to someone inappropriately attired, or from serving the banned alcoholic drinks. Second, he believed that foreigners would be enticed by this modest behavior, to ask questions about the cause behind those restrictions, and thus be introduced to Islam. He jovially affirmed that stricter laws will lead to more converts to the rightful religion. The host was left speechless, obviously in admiration and not discontent. Coincidentally, the day after this program, a large statue of Pharaoh Sesostris I (Senusret III), standing in the middle of a square in the Delta city of al-Mansoura, was toppled overnight. The Supreme Council of Antiquities accused salafis of knocking down the statue, but the Daqahlia governor said erosion and wind were responsible. He added that the statue was a replica anyway so it was not really significant. 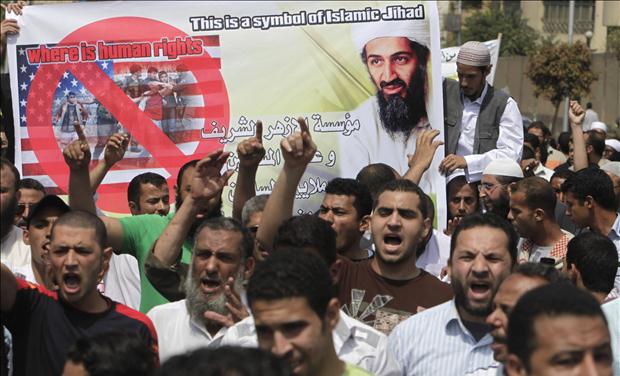 Alarmingly though, this rapid trend towards Islamization of the society is sweeping Egypt without any hint of a substantial opposition. The Supreme Council of the Armed Forces (SCAF), who have been ruling the country ever since the fall of President Mubarak on February 11, 2011, has freed prominent Islamist figures from jail and even allowed exiled extremists to return to the country. SCAF appointed a committee to change the Egyptian Constitution headed by an overtly Islamist thinker Judge Tariq el-Bishri, and a leading Muslim Brotherhood (MB) figure (Sobhi Saleh, Lawyer and MB leader). SCAF authorized a popular referendum on the new temporary constitution opposed by revolutionary and secular forces. SCAF never blinked at the MB’s or salafis’ overt propaganda that voting “Yes” on the referendum was the Islamic way and voting “No” was thus non-Islamic .

When the government appointed a Christian governor in Qena, located in Upper Egypt, the Islamists refused. They sabotaged the railroad tracks and blocked the highways to the province for two weeks. SCAF did nothing and the governor never took office. Even while the current constitution forbids the formation of political parties based on religious indoctrination (see article 4), there exists today more than a dozen Islamic parties, and thousands of candidates ready to take on parliamentary elections due to start this month. Muslim leaders announced that they expect the Muslim Brotherhood to win 50% of the seats with an additional 30% of the parliamentary seats going to a coalition of other Islamic parties. They added that an Islamic constitution would eventually follow.

With the multiple incidents of assaults on churches openly carried out by Islamists, SCAF timidly pleaded with the Islamists to end their aggression, even brought their own religious leaders to appease them, and on only one occasion had to rebuild a church de nouveau. Yet, no one was ever tried or punished for this reprehensible conduct. Christians are being killed all over Egypt at an alarming frequency since the revolution. There has not been one investigation carried out that led to the incrimination of any of the salafis who have openly bragged about their aggression in footage available online. After the latest massacre of Christians in front of the Maspero building, where more that 27 were killed and 250 injured, SCAF is investigating the military’s involvement while vehemently denying any wrongdoing. Video shows the military taking part in this massacre, using armored vehicles to crush Christians.

In today’s Egypt, liberal, secular and Christian political forces are being treated with fists – recall the imprisonment of some twelve thousand protesters after very short trials. Islamist leaders are being caressed with a soft hand despite their documented violence evidenced by the destruction of church buildings and killing of Christians.

The temporary government either fears igniting the extremists’ animosity, or simply endorses their behavior but is too cautious to openly support it. SCAF makes sure to announce after each violent incident that they support democratic change and favor the transition of Egypt into a secular state. However, their actions do not support their declared intentions, which may imply that they are wary of the reaction of the less senior ranks within the armed forces themselves, or the openly declared Islamic political and popular forces in Egyptian society.

In any case, it’s only a matter of time until we find out whether the January 25th, 2011 Revolution will bring about a new Egypt that looks more like Pakistan, with an unbreakable alliance between the army and the Islamists in defiance of democratic and progressive values. Or will Egypt be like Turkey, where the Islamists are watched over by the army (or were at least until recently), and there is a fairly democratic political system. We hope that Egypt will be like Spain, where the removal of an army dictator engendered a truly secular and progressive democracy, even for a people with a strong religious background.

Do you remember Pearl Harbor Day 1941?
archives most recent
More from Beliefnet and our partners
previous posts