Where does faith fit in with politics?

It’s not what candidates believe, but that they believe in something, says N.T. McQueen, author of Between Lions and Lambs.

“With the presidential race well underway, candidates are already trading barbs about religion,” says McQueen. “Mitt Romney is getting hassled for being a Mormon as his opponents posture about their Christianity, while some fringe commentators still rail on about how President Barack Obama is secretly a Muslim, as if any of that actually mattered.

“Don’t get me wrong. I believe a candidate’s faith is very important and should be one of the criteria people use to decide who gets their vote. I just don’t believe it should matter which faith is in play.”

McQueen comes from a family of preachers and grew up attending several churches. He lives in Northern California with his wife and two children — and says “faith is not just about believing in God or a higher power, but in those select few elected by the people to act on our behalf in the governing of this country.

“Faith is about character,” he writes:

We must remember, as much as we use the term democracy to describe our system of government, it’s actually a republic. The people don’t make decisions on how they are governed. We elect others to do that for us. In doing so, it is in our best interests to do what we can to ensure that those officeholders are individuals of strong character.

That’s why it’s so easy for the legitimate debate about issues in this country to be derailed by the frequent morality play of scandal. Compromising pictures on Twitter, affairs with staffers, arrests for indecent public behavior and a side order of graft and corruption will always make the headlines. However, there is a reason for that, above and beyond the public’s fascination with the prurient and the lurid. That reason is character.

That is where I believe faith comes in. In short, I believe faith signifies trust. For those individuals seeking public office who profess faith in any higher power, the common conception is that they hold themselves to a higher moral standard, one of honesty, transparency, and veracity.

I believe faith is important for everyone and, as Americans, it is our responsibility to tolerate and accept the varied individual belief systems prevalent throughout our culture whether Christian, Hebrew, Hindu, Muslim, Agnostic, Mormon or any other. If faith results in a constancy of moral and ethical behavior, then faith should be a key component of a good candidate’s character.

However, as responsible citizens seeking elected office, their faith should be used only as a tool to promote their credibility, and not as a platform to preach condemnation. A candidate who sings the song “My God is better than your God” is misusing their professed faith. I use the qualifier “professed” faith, because it has been my experience that those who bellow about the superiority of their chosen faith are charlatans and lack the strength of character valued by the very faith they proclaim they possess.

This can sometimes make candidates wary of discussing their faith, but leaders should not be afraid of their spiritual beliefs. They should embrace them. They will gain more respect as people who hold steadfast to their beliefs than if they abandon their faith or misuse their faith for the sake of the ballot. 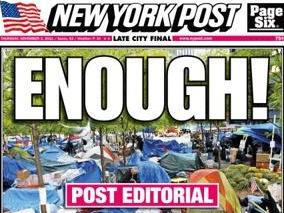 NY Post: Scabies, lice at Occupy Wall Street prompt mayor to hose the place down
archives most recent
More from Beliefnet and our partners
previous posts