A Montreal judge has ruled that Paula Celani worshiped illegally — fining her $144 — charted with cult activity.

“On a Sunday morning two years ago,” reports Graeme Hamilton in Canada’s National Post newspaper, she and “about 80 members of her Catholic lay group gathered in a hall they had rented from the city.

They watched an inspirational video, they prayed and they capped it off with a potluck lunch. “We had a beautiful day,” Celani recalls.

“But now that beautiful day has generated a nasty court battle after she was hit with a $144 ticket from the city, which alleged her event was illegal because it involved religious worship,” reports Hamilton.

No one had warned Celani, she says, or anyone else in the group, that prayer and worship is now a legally prohibited activity in parts of Quebec.

This week her lawyer advised Montreal’s municipal court that they will challenge that fine on grounds of unconstitutionality.

“The case illustrates how far the pendulum has swung,” writes Hamilton. “Public displays of religious faith have come under increasing scrutiny in recent years as Quebecers have embraced secularism. The opposition Parti Québécois has proposed legislation that would prohibit members of the civil service from wearing ‘ostentatious’ religious symbols.”

“Ridiculous doesn’t begin to describe it,” noted the National Post. “Frightening is a much better place to start.” 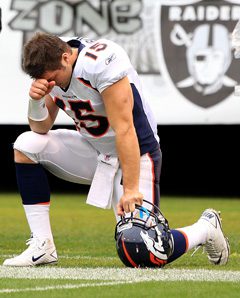 Would they mock Quarterback Tebow’s faith if he were Jewish or Muslim … or Buddhist?
archives most recent
More from Beliefnet and our partners
previous posts