King of Jordan: Israel must be assured of its security

Jordanian King Abdullah II told participants at the World Economic Forum this week that Israel must have defendable borders — and must be assured of its security.

The statement was historic if for no other reason than the occupied West Bank that is being proposed as a Palestinian state, was for years part of Jordan.

“More than 1,000 people from 50 nations participated in the two-day conference held on the Jordanian shore of the Dead Sea,” reported Arutz Sheva, Israel’s TV channel 7.

A peace deal between Israel and the Palestinian Authority must ensure Israel’s security and acceptance, and lead to the establishment of a Palestinian state,” Abdullah said.

The Hashemite king also criticized those who he said sought to close the door to peace.

“Our region stands today at the gates to the future,” he said, emphasizing four crucial areas to focus on: dignity, opportunity, democracy and ‘peace and justice.'”

During the conference, Abdullah made time to meet with PA Prime Minister Salam Fayyad on the sidelines of the gathering, according to the TV channel. 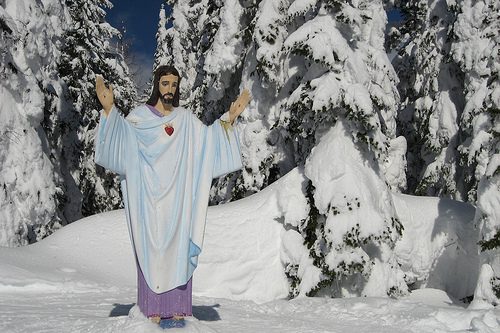 Washington Post: Will Knights of Columbus have to remove ski slope's Jesus statue?
archives most recent
More from Beliefnet and our partners
previous posts