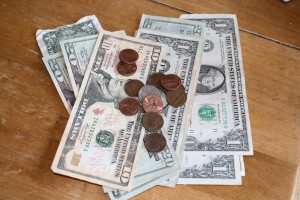 I was looking through some things I had written years ago and I found this little impromptu essay I had written to my niece about money. At this time we had just returned from a life-changing move to South Dakota. We had arrived in South Dakota Dec. 23 and returned home April 23 (that’s four months, People!) feeling utterly defeated. It had not turned out like we had hoped and we returned to our house (thankfully it had not sold!) unemployed with $1,000 in our savings! It was a scary yet miraculous time for us. We had no idea where our grocery money, mortgage payment, or utility cash would come from each month, but money came from unexpected sources…miracle upon miracle.

Last week I was listening to a speaker talk about how safety is a killer for creativity, synchronicity, fabulous coincidences, and miracles. I think this is true. At this time in my life we were not safe…but we chose not to be in fear. And each day delivered lovely surprises. Also, I unearthed some wisdom about cash flow and I thought it would be interesting to share those old lessons I learned with you here.

This is one of those many subjects which I was just sure I had it “all figured out”. Leo’s are known for pride.  Well, as it turns out, I was wrong: I don’t know a blasted thing…except that God is faithful. We made $20,000 less in 2006 than we made in 2005! And we were at poverty level in 2005! Yet….we have more tucked away then we’ve ever had before and we are wanting for nothing (I mean NOTHING…I even bought the Waltons Season 4 DVD! lol). What is up with that?  Believe it or not, I think it’s because I have stopped counting.  Our finances have left my hands (because no budget is miraculous enough to help when the bills are bigger than the income) and have landed in God’s..and God is far better at it than I.

My second thought is this: I’ve put importance on money-amounts by equating them with a task. I watch a baby three days a week and get paid $50. So I change diapers, spoon food, and listen to her squeal fluently in ten languages for $17/day!!! So do you think I’m going to now take that $17 and spend it on a bbq meal or Avon anklet?? Uh…NO!  It is precious, treasured and saved toward something worthy (hunkaland).

As soon as you get any money…no matter how small….put it somewhere safe where you’ll leave it alone. Don’t carry more than $20 cash ever. Don’t go in stores that tempt you with CRAP.  Have your kitchen stocked with healthy food and some danger food, too, so you’re not tempted to go out all the time. Think through purchases and only buy things you’ve wanted for over a week.

Go ahead and use a budget…figure out what your bills will be and set that money aside, but don’t trust the budget…or the job/paycheck…ultimately, it really is in GOD’S HANDS.