I remember when my oldest child was a baby/toddler I would make grand announcements to my friends–“He is sleeping through the night!” “He is potty trained!” “He is a brat!”—only to find out the next day that I was…uh…wrong.

Simply put, there is nothing we can count on except for change.

Two days ago I blogged about the orphaned Chihuahua my foster mama cat had adopted.  Yes, that status has changed. She sent him back to DHS. No, it wasn’t that dramatic. Every two hours I was putting little Mowgli (pup) up to Morning Flower (cat) and letting him nurse. It was going well until yesterday when he stopped having relaxed nursing sessions resulting in a full tummy, but instead had frustrated times with much growling and squirming. I think possibly the much larger kittens were either drinking  all the milk (?) or maybe their suction was just more developed than his. Whatever the case, our little boy was not faring well this morning so I called his owner. Miracle of miracles, she was able to track down a woman whose Chihuahua had babies just two days ago. It is an ideal situation.

Yesterday I blogged that our ferret was dancing with death. He was having seizures and couldn’t even drink. I was sure it was the end and I don’t regret the extra care and love we showered upon him.  But yesterday afternoon he took a drink! And today I saw him eat! And maybe we have some more time with sweet Emerald!

How often I forget the chance of change. So many times I stress myself out over things that don’t even happen! I will over-book my schedule, and, after hours of trying to figure out how to cancel an event, it cancels itself all on its own.  I will worry about an upcoming conversation or a visit or an outing and then those things evaporate as if they were never even thoughts in my head.

Someday I may learn that this very moment that I am living right this second, is the only moment I am completely, 100% guaranteed. This moment is happening. And so why not give this moment my full attention? Because…really…everything else is liable to change. 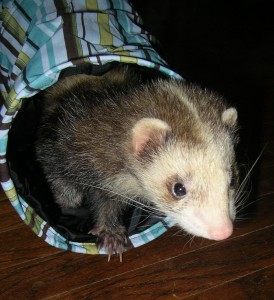