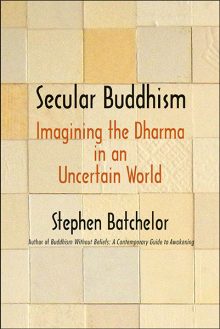 Stephen Batchelor: Secular Buddhism: Imagining the Dharma in an Uncertain World contains twenty-five years of his writing. You may be familiar with some of these articles from his contributions to Tricycle and I recently enjoyed reading his article arguing for a Buddhism 2.0 in a Buddhist academic journal. This book contains three new contributions, making the book worthwhile, even for those readers who have read all the  other Batchelor essays.

After reading–really consuming–his previous book After Buddhism, I was delighted and astonished to learn of this new title being released. How could he have written another book after the masterful magnum opus that was After Buddhism in such a short period of time? I was relieved to find out that Secular Buddhism was a compilation of mostly previously published essays. Batchelor was human after all!

The first chapter is a poetic reflection on Bachelor’s influences–rendered as conversations. These include, surprising appearances from St. Augustine and the philosopher Fuerbach. Such conversations help Batchelor to articulate a secular vision of the Buddha’s radical pedagogical project.

After reading his 2015 tome, After Buddhism, this introductory chapter offers new material and I find that I never tire of Stephen Batchelor’s insights and the articulate manner in which he presents them.

Instead of nirvana being located in a transcendent realm beyond the human condition, it would be restored to its rightful place at the heart of what it means each moment to be fully human. Rather an devoutly repeating what as been said many times before, your risk expressing your understanding in your own own stammering voice. (2017, 24)

In his essay, “An Aesthetic of Emptiness” (written specifically for Secular Buddhism), Batchelor describes his artistic discipline of making collages from discarded objects such as paper, cloth, and plastic. These objects are best when distressed by the vicissitudes of physical existence, such as being trampled by foot traffic on the street. This distress, then, become a metaphor for dukkha–the decay, dissatisfaction, and distress of material existence. Human beings are no exception.

As with all of Stephen Batchelor’s work, the writing throughout is gorgeous, even as it spans the decades marking the evolution of his thinking.

Secular Buddhism has something to offer everyone. For already existing Stephen Batchelor fans there is enough new material to engage and expand the conversations initiated in Buddhism without Beliefs and After Buddhism. As well, it is a pleasure to revisit older pieces. For soon-to-be Batchelor fans, this book is an accessible way to gain a broad view of his positions on secular Buddhism.

For me, the final section on Art and Imagination, was especially satisfying and inspired the following thoughts. Batchelor points to the commonalities of the artist facing creation and the meditator facing the present. Each confront a moment of uncertainty and both can shy away from the task.

The creative call for both parties is to create something original, true, and courageous. The product for the artist is more obvious, but for the meditator the product and its attainment are more subtle. What does it mean to have an original moment?

To approach this, one must set aside preconceptions, whether one’s own or those imported from a belief system (e.g., dogma). To be original in the moment requires relinquishing the known for a new impression. To accomplish this originary moment is impeded at every step by the instinct of categorical perception and a lifetime of established learning. It may not even be possible to suspend categorization completely (neural beings can’t do that). However, it might be plausible to approach it in a relative fashion.

Stephen Batchelor argues that the contemplative experience is aesthetic, not strictly a cognitive-behavioral-affective affair. This raises the possibility that every moment of existence could be a creative act, not merely derivative and subordinated to existing knowledge. The fact that most moments of a life are not aesthetic—in the sense of being creatively original—demonstrates the deadening power of categories.

We lose sight of the fact that poet Renee Chard pointed to when he said that “every moment is virgin, even the repeated ones.” I agree with Batchelor that the artist and the meditator aim for that kind of startling yet hard won freshness. Such perception both effort and letting go in almost the same moment.

The effort is like straining to keep an aperture of attention open long enough that thoughts to do not close prematurely. The letting go is like Rilke’s swan falling into the water where everything that used to confirm us on solid ground are now lost in weightless free fall. To continue this image, the arms work to hold open a space into which the body allows itself to fall, letting gravity pull attention into an uncertain and, perhaps, terrifying abyss. Yet, at the very same time, that abyss has a familiar quality to it, almost as if it were the home one has been estranged from, exiled by excessive thinking.

The wish for safety makes this falling terrible. The realization that there is no such thing as safety makes it wonderful, enlivening, and confirming. That confirmation is a paradox: by recognizing that no solid ground exists one is grounded all the same. It is only be embracing impermanence that any semblance of heart is preserved. It is only through becoming psychologically homeless that one returns from exile.

The late Galway Kinnel said, “Poetry is somebody standing up, so to speak, and saying, with as little concealment as possible, what it is for him or her to be on earth at this moment.” Likewise, E. H. Gombrich said, “It takes an artist to make us attend to the message of reality” (cited in Batchelor, 2017, 224).

A clever demonstration of originality is no guarantee of the truth that poetry and art can reveal. For both the meditator and the artist, the relinquishment of preexisting knowledge goes hand-in-hand with a renunciation of self-centeredness. It is not me who does the creation; me is the creation, the embodiment of the creative process itself.

Both artist or the meditator can succumb to the tendency to say, “Look at me! See how clever I am.” In meditation, self-aggrandizing always seems to occur in those moments when the primordial opens up and awareness falls through the aperture only to find itself being named and attention yanked back into the personified, languaged, and already characterized identity.

Stephen Batchelor, I have learned, is the embodiment of lifelong conversation between art and meditation–living an awakened life through the aesthetic appreciation of each moment. Life is art and art is life.

All Our Waves are Water: Surfing Life's Ocean
archives most recent
More from Beliefnet and our partners
previous posts