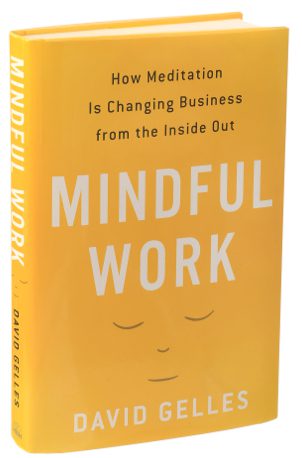 Two recent articles in two major publications–The New York Times and The Atlantic–focused on the rising trend of mindfulness in corporate settings and both articles feature the recently published book by David Gelles: Mindful Work: How Meditation is Changing Business from the Inside Out.

Mindfulness is becoming more popular in the workplace. Mostly, this is a good thing. It may be a fad or a response to deep seated needs. As a fad, there are risks that it will be oversold, under taught, and misapplied.

The Atlantic Article states: “Decades of research suggest that setting aside time for mindfulness can improve concentration and reduce stress.” I placed emphasis on “suggest” but this often gets overlooked. This claim may be true but there really isn’t enough evidence to support this with rigorous conviction. Many of the studies included in that claim have not been sufficiently controlled. The NY Times articles cites Willoughby Britton, whom I quoted in an earlier post.

We believe mindfulness is helpful. I know this from my own practice and from the people I have trained and taught over the years but we really can’t say for certain that other factors, non-specific to the meditation itself, give rise to the positive benefits.

I do believe the data will catch up the claims eventually and that we’ll know it as more than a suggestion. Meanwhile, we will all continue to oversell it. As mindfulness becomes trendier, those claims will become more grand and critical scrutiny will lessen.

More than one-quarter of the company’s work force of 50,000 has participated in at least one class, and those who have report, on average, a 28 percent reduction in their stress levels, a 20 percent improvement in sleep quality and a 19 percent reduction in pain. They also become more effective on the job, gaining an average of 62 minutes per week of productivity each, which Aetna estimates is worth $3,000 per employee per year. Demand for the programs continues to rise; every class is overbooked.

I was involved in the early implementation of a 12-week online program that Aetna was piloting. A very solid and straightforward curriculum that taught participants how to meditate, work with their thoughts, emotions, and bodily energies and to be less reactive in communication. All good stuff.

It might be useful to distinguish between “mindfulness” and “Mindfulness.” Mindfulness typically refers to our ability to attend to the present moment without reactivity or judgment. In this way, mindfulness with a small “m” is ethically neutral. If you are doing something in the workplace that is destructive, you can become a more relaxed and proficient producer of that destructiveness.

The Buddha had a more nuanced and expansive view of mindfulness. Mindfulness with a capital “M” is ethically grounded attention. To be mindful is to give something our full attention with the absence of clinging desire or aversion. The attention also includes a sense of what is beneficial for one’s self and the people around them. If you were doing something destructive, you couldn’t be mindful, even if you gave it your full attention.

While there is no guarantee that practicing mindfulness will make people or the companies they work for more ethical (a point made by David Gelles in the Atlantic Article) there is nothing to prevent that either. I see mindfulness in corporate America as a Trojan horse. The deeper teaches may be lost on some or even most of the participants, yet others will open to the wisdom of the practice. Simply by meditating, we can see all these forces in action. If you pay close enough attention to your process, you will move towards a more ethical way of being in the world.

There was also a recent and critical article by David Brendel in the Harvard Business Review. He cautions:

At times, it appears that we are witnessing the development of a “cult of mindfulness” that, if not appropriately recognized and moderated, may result in an unfortunate backlash against it.

He goes on to site the positive and necessary benefits of stress and how mindfulness could be recruited, by some people, to avoid difficult situations. The case he cites seems to represent a misappropriation of the practice. What we want to do is to avert unnecessary stress–stress that is compounded by our own minds. There is nothing inherent in mindfulness practice about being passive, avoidant, or nice when the situation calls for candor, forthrightness, and firmness. Mindfulness can be fierce, as well as gentle.

The other caution is not to impose mindfulness practice on people. This should be self-evident but probably a good reminder for corporate leaders considering bringing the practice into the workplace.

Corporate mindfulness is in its ascendency. I look forward to contributing more to its dissemination in the future. While there are always downsides to a fad, mindfulness has real value that will persist once the sheen has worn off. If 2014 was the Year of Mindfulness, I look forward to seeing what 2015 has in store for us. Will it be continued growth or backlash? Stay tuned to the present moment to find out.

The Other Kind of PDF: Public Displays of Frustration
archives most recent
More from Beliefnet and our partners
previous posts