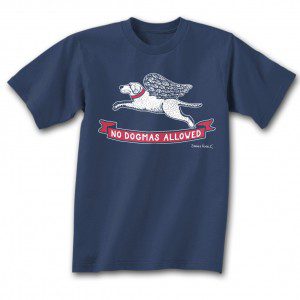 I recently gave a talk at the University of Vermont College of Medicine called “Beyond Stress Reduction: Mindfulness as a Radical Technology. In this talk, I spoke about the indictment that the healthcare and corporate-related applications of mindfulness are tantamount to “McMindfulness.”

If you read my post on this issue, you know that I think the criticisms of secularized mindfulness go to far. In my talk, I made the point that secular dharma is a uniquely Western dharma.

Secular Buddhism, which seeks enlightenment, accords with the Enlightenment era values of rationality, empiricism, and skepticism.

The Buddha was not the founder of a religion. He did not start Buddhism. In fact, there are many Buddhisms or Buddhist religions.

He was a teacher and saw himself more as a physician, healing humanity. He had followers and eventually these followers proliferated and traveled. When they did, they created a new religion.

When Bodhidharma brought the Buddha’s teachings to China they merged with indigenous cultural and religious elements to become Chan. When the teachings moved north to Tibet, another morphing of culture and religion took place.

Now in the West, you can find Japanese replica temples with all the rites and rituals that you would find in Japan. You can go to Tibetan Buddhist centers where you are exposed to all the Tibetan colorful forms that have been imported to Western soil.

This wholesale importation of Buddhism strikes me as unprecedented. I am not aware that it has happened anywhere else. Each host country has put its imprint on the teachings.

The secular mindfulness and buddhism movement is our uniquely western spin on the Buddha’s teachings. This does not water the teachings down or corrupt them any more than what has happened in Tibet, China, and Japan (and many other countries).

The creed of Western Dharma is sympathetic with the late artist Stephen Huneck’s plea: “NO DOGMAS ALLOWED.” Simple as that.

The Buddha’s teaching can be studied without dogma, rigidity, or prescieintific superstition. They can be experienced this way as well, particularly on a vipassana style meditation retreat.

As it turns out, I am about to embark on one of these retreats in a short while. I will be at IMS or the Insight Meditation Society, the premiere secular Buddhist practice center on the East Coast.

I will be doing sitting and walking meditation from 5 AM to 10 PM for the next seven days in silence. No talking, reading, or writing. This is Noble Silence.

Consequently, I won’t be posting until I get back. This will be a week to test the Buddha’s teachings in direct fashion. I will see how the three fires operate. I will fill greed, aversion, and confusion beset my mind and then the breath will come into to liberate me from these stories.

This cycle will happen over and over again, countless times during these many hours of practice. I don’t have to take any articles on faith; I just have to sit with my experience and work with my mind. Hopefully, I’ll be able to move my mind in skillful ways and enjoy the gift of silence and inquiry that the retreat provides.

It is hard to set aside the constant doings and connections of everyday life, yet retreat is a powerful way to deepen our practice and to become better people in the process: more present, compassionate, and contended.

The Everything Guide to the Introvert Edge: Available Now!
archives most recent
More from Beliefnet and our partners
previous posts